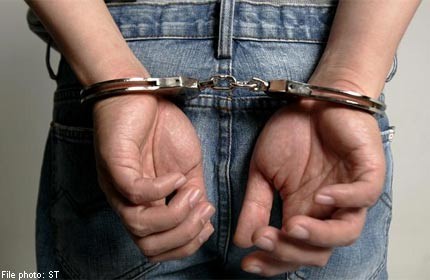 JOHOR BARU - A Singaporean businessman, who had tried to bribe two traffic police officers, was arrested after a 20km car chase here.

The chase started from the Sultan Iskandar Customs, Immigration and Quarantine complex (CIQ) here around 11.30pm on Sunday to Taman Sri Putri in Skudai.

The 50-year-old suspect, who was driving a Mercedes Benz, was returning to Singapore when his car obstructed other vehicles passing through the checkpoint lanes.

This prompted the two traffic police officers on duty at the CIQ complex that night to detain him.

However, he refused to cooperate and instead tried to bribe L/Kpl Awang Mohd Massahdi Awang Abunawas and L/Kpl Mashri Sedek by offering them RM550 (S$213).

"We were waiting for assistance before sending him to the nearby central police station but the suspect sped off in his car towards Skudai," said Awang Mohd Massahdi.

Awang Mohd Massahdi and Mashri have been working with the traffic police unit for 11 and 15 years respectively.

The suspect has been remanded for four days from Aug 11 to 14 and the case is being investigated under Sections 186 and 214 of the Penal Code.

The suspects were nabbed on Aug 6, and police found a machete, two mobile phones and two bags containing spanners, pliers, Allen keys and cash in their car.