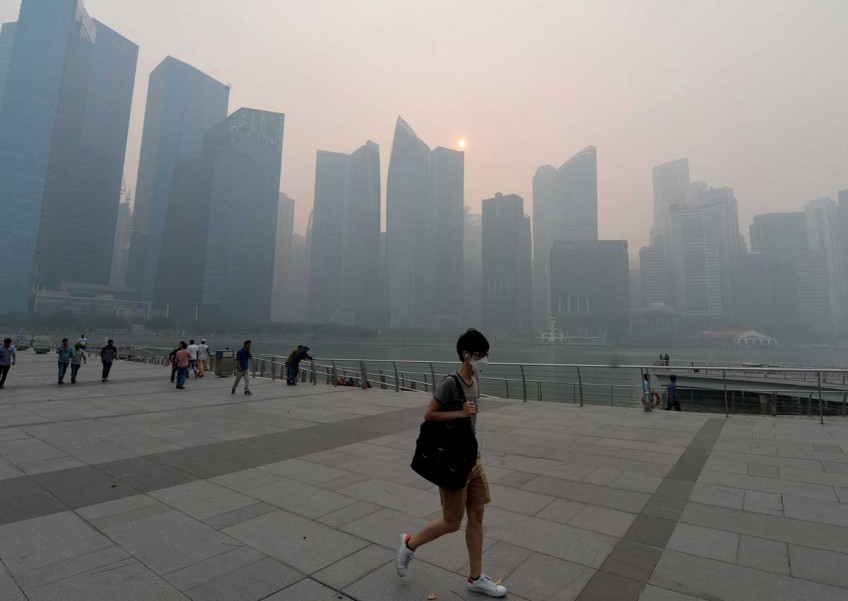 SMOKY: The view outside Marina Bay Sands at 5.30pm on Thursday.
The New Paper

From a campaign to get people to buy environmentally friendly palm oil products, to dragging companies responsible for fires in Indonesia to court - Singaporeans are intensifying their fight against the haze.

A campaign to get consumers here to buy green products has collected more than 6,800 of the 50,000 signatures it hopes to get.

The aim is to send a message to companies that consumers insist on clean air and the use of sustainable sources, according to the organisers - the World Wide Fund for Nature Singapore, the People's Movement to Stop Haze (PM Haze), and the Singapore Institute of International Affairs.

PM Haze had a booth at yesterday's EarthFest event at the Marina Barrage, and collected more than 100 signatures. More importantly, its volunteers got a chance to spread its message.

Volunteer Jeremias Kuay, 24, a fresh graduate, said: "People seem to be very concerned about the haze. They approached us asking what they can do as an average consumer to help stop the haze. One way to start is by switching to brands that use sustainable palm oil."

Palm oil can be found in many products such as shampoos and instant noodles. One of the main reasons for the haze is the large-scale land clearing for the production of palm oil and paper in Indonesia.

Yesterday, the Pollutant Standards Index (PSI) readings dipped to a 24-hour reading ranging between 85 and 102 at 5pm, which is in the high end of the moderate range and the low end of the unhealthy range - which was good news for EarthFest's organiser - chemistry teacher Michael Broadhead, 32.

Almost 10,000 visitors attended the event which featured 85 booths, some of which highlighted a range of green issues.

Mr Broadhead, who spent $6,000 on the event in collaboration with national water agency PUB, said: "People are now drawing the connection that the haze is being caused by palm oil and paper companies, some of which are Singapore-based."

They are looking for groups which have incurred losses of a few thousand dollars, such as hotels and tour agencies which had bookings cancelled, to sue these firms.

Dr Ang said: "It's really not so much the act of suing and winning per se, but more the reputational damage it will cause."