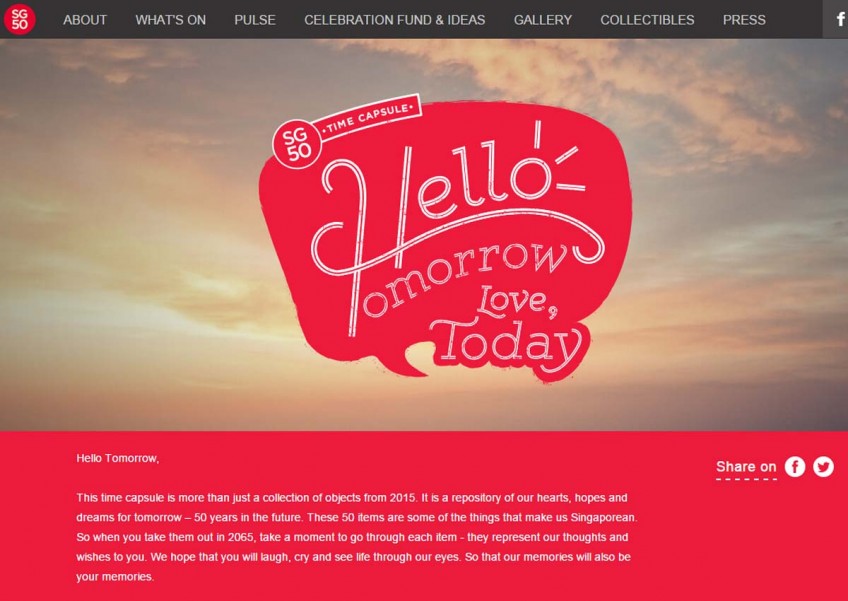 Singaporeans are invited to pick from a list of 60 items to be put into a special SG50 time capsule, which will be opened when the nation celebrates its centenary in 2065.

The items include memorabilia such as old National Library and public transport cards, Housing Board flat keys and even a model of the Singapore-made SAR-21 rifle.

Each item is supposed to match one of four themes celebrating Singapore's unity in diversity, sense of home, links to the wider world, and resilience as a nation. For example, N95 face masks were suggested as a nod to Singaporeans' resilience during the 2013 haze when the three-hour Pollutant Standards Index shot up to an unprecedented 401.

Members of the public are also encouraged to pen messages on why the items are significant to them. These messages will also be put into the time capsule.

Until Nov 1, those interested in contributing can pick their favourite items - or propose new ones - via the official website at www.singapore50.sg/timecapsule.

Alternatively, they can visit the digital selection booths set up at the Central Library @Bugis until Sunday. After that, the booths will move to other libraries and the Asian Civilisations Museum until Nov 1.

People can also select items at the interactive Hello Tomorrow | Love, Today display at the National Museum from next Saturday.

The items chosen to be placed in the time capsule will be revealed at the end of November during the Jubilee Big Walk.

"Beyond a collection of items, the SG50 time capsule celebrates our diversity, our values and our aspirations for the future," said Education Minister Heng Swee Keat, who is also chairman of the SG50 steering committee.

In a statement issued by the committee yesterday, he said: "When the time capsule is opened in the year 2065, it will give (future generations) a glimpse into our way of life, the memories and values we share, as well as our hopes for the future."

This article was first published on Sept 22, 2015.
Get a copy of The Straits Times or go to straitstimes.com for more stories.