S'poreans still heading for Paris: 'If we stop, it means we let them win' 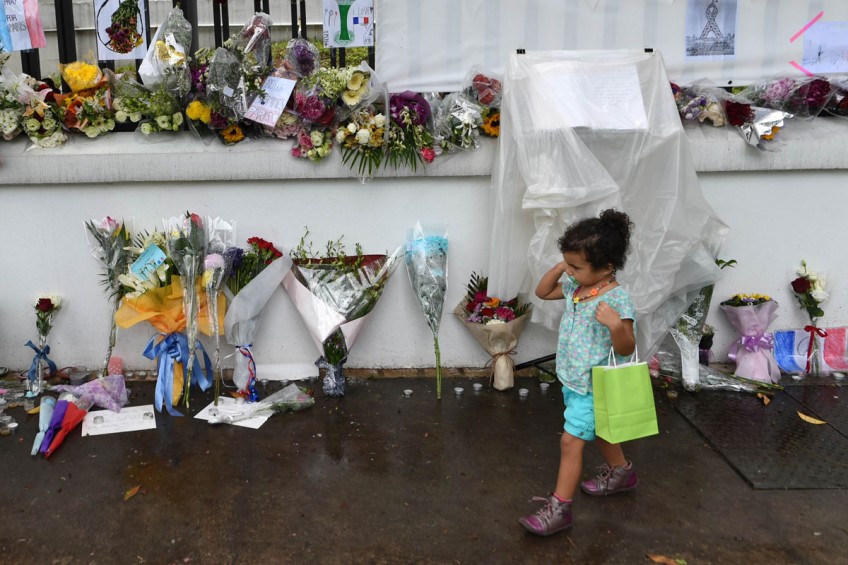 Messages and flowers are seen in tribute to the victims of Paris attacks outside the French Embassy as a little girl walk past in Singapore on November 16, 2015.
AFP

The city of Paris is now in lockdown after France declared a state of emergency that could last up to three months following devastating terror attacks last Friday.

While some holiday makers may be scrambling to change their plans to visit the city, Mr Mohammed Asrisarhan Jasman and his friend are still going ahead with their four-day trip to Paris next Monday.

Mr Asrisarhan, 26, a fashion assistant, said: "We bought the tickets in March and everything has been paid for, the Airbnb (accommodation) and the tickets for the attractions, so it would be a waste if we didn't go."

Family and friends advised them to change their holiday plans but Mr Asrisarhan said: "It's been my dream ever since I was young to see the Eiffel Tower and to experience the culture in Paris, so I don't want to miss this chance.

"We hope the attractions will be open when we get there.

"Of course, I'm fearful, but it would be the attackers' whole point to instil fear. If we stop daily life from happening, it means we let them win."

His friend, Mr Mohamed Nasri Mohamed Naguid, 29, was initially apprehensive: "I am definitely worried something might happen, but there is only so much we can do and I will just take it as it comes.

"I wanted to forfeit the whole thing at first, but it's Asri's first trip to Europe. I guess it will be all right."

Mr Nasri, a flight attendant who travels to Paris at least once a month, added: "I still want to come back in one piece, so we'll have to be more vigilant when we're there."

They will take extra precautions like planning routes thoroughly and avoiding the area around the Bataclan concert hall, where one of the deadliest attacks took place.

He will also try to get updates from his colleagues on the ground in Paris.

Marketing manager Wong Shuk Leng, 27, also plans to be extra vigilant during her time in Paris with her sister.

They are visiting Paris as part of a 13-day tour package that they booked in July and are due to depart on Saturday.

"If I had a choice, I would want to skip that leg of the tour. But the agency said that it will be going ahead. So we will just go (along)," said Ms Wong.

"The agency said it will monitor the situation and our safety is a top priority."

Two travel agencies, Chan Brothers Travel and ASA Holidays, said no customers had cancelled any Central Europe tours comprising Paris as a destination as of yesterday.

Their tours will proceed as planned.

Chan Brothers marketing communications executive Rebecca Chia also said some customers have expressed concerns over the itinerary but are adopting a "wait-and-see" attitude.

She added: "We are closely monitoring the local situation... (and will) keep in touch with our inbound Europe counterpart for information."

But a spokesman for CTC Travel said it was in the process of informing customers that its Central Europe itineraries would be rerouted.

Tour groups travelling this month and next month would not be going to Paris.