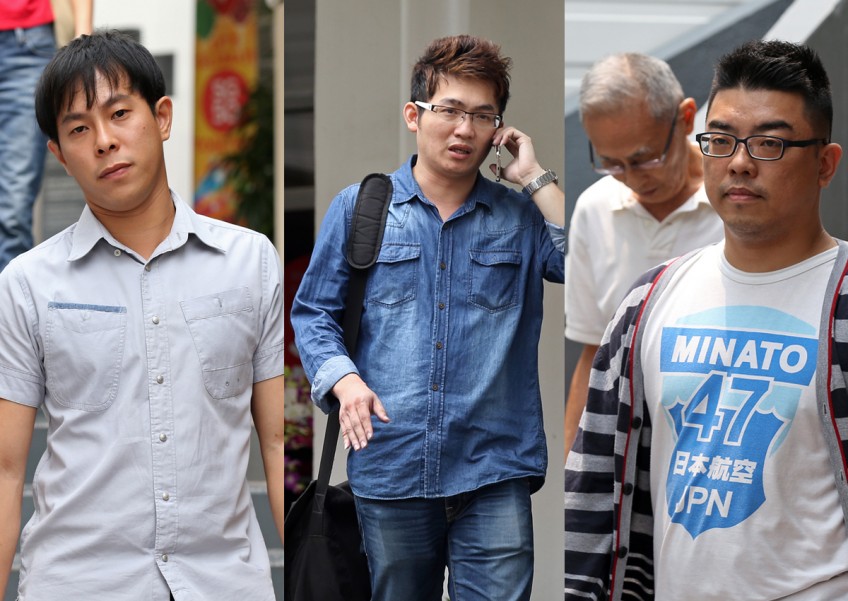 Gadget Terminal staff members (from left) Wilson Lim Weisheng, Chung Choon Cheik – who is also the shop’s boss – and Tan Wei Ping are three of the five men accused of engaging in a conspiracy to cheat walk-in customers.
The Straits Times

The men from Gadget Terminal are accused of engaging in a conspiracy to cheat walk-in customers.

In one instance in October last year, a Chinese national was conned into paying $1,000 for a Xiaomi mobile phone priced at $380.

Gadget Terminal's boss, Malaysian Chung Choon Cheik, 33, faces the most number of charges - eight - while the rest face between one and three charges each.

The shop has since closed.

Lim, Chew and Lin are expected to plead guilty.

They will return to court on Nov 12.

Chung, represented by Mr Peter Fernando, allegedly cheated customers of a total of $6,300 between October 2013 and September last year.

Seven of the charges accuse him of scheming with Lim, Chew, Lin or Tan to cheat customers.

They allegedly duped customers into believing that the phone or phones would be sold to them at a certain price, which they knew to be false.

Lim allegedly conspired with Chung to cheat a customer of $3,600 as payment for three iPhones on Nov 9.

Additional charges, if any, may be tendered at his next court appearance.

Chung's case has been fixed for a pre-trial conference on Nov 19.

Lim's police bail has been extended while the others were offered $10,000 bail each.

Their passports have been impounded.

Last week, four salesmen from the now-defunct Mobile Air shop were sentenced to between four and 14 months' jail each for conspiring with Mobile Air owner Jover Chew to cheat customers.

The maximum punishment for cheating is 10 years' jail and a fine.