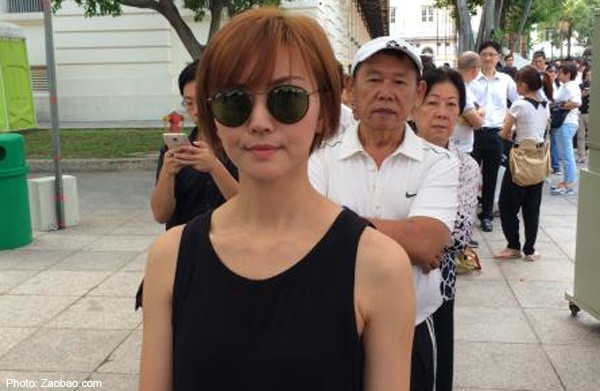 SINGAPORE - Mandopop star Stefanie Sun was spotted among the thousands of others in a long line to pay their respects to Singapore's first Prime Minister, Mr Lee Kuan Yew, Zaobao.com reported.

She was with her family and among the first in the queue this morning.

Sun also tweeted her condolences shortly after his death was announced on March 23, and penned a moving tribute to the late Mr Lee for The Straits Times.

In her tribute, she recalled singing Mr Lee's late wife's favourite song, Que Sera Sera at the Business Chinese Awards in 2011. She heard later that there were tears in his eyes during her performance.

Local celebrity blogger Xiaxue was also among those in the queue today. She posted on Instagram at about 11am that she was in the queue for one hour, but "moved 20 metres".

Mr Lee's body is lying in state at Parliament House from today until Saturday, March 28.

Due to the overwhelming response, opening hours has been extended to 24 hours, until 8pm on March 28.

MRT services will also run for 24 hours on Wednesday.

According to Zaobao.com and The Straits Times, the earliest mourners came to pay their respects midnight but were only allowed into the queue at Parliament House in the wee hours of the morning. More people joined the queue after 6am, but only managed to get in to the hall past 10am.

Photographer Ong Wee Jin followed the queue from near UOB Plaza to Parliament House where the late Mr Lee Kuan Yew is...