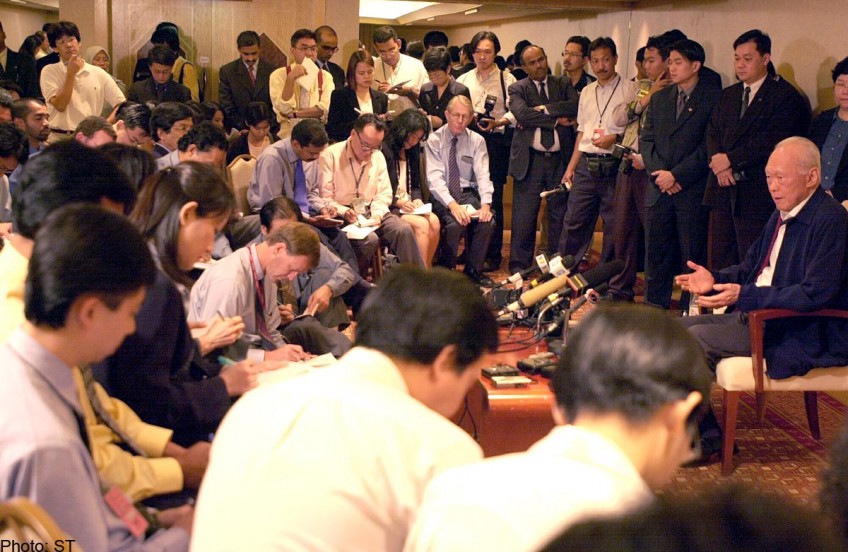 LEE Kuan Yew was one of the great statesmen of the post- WWII era. He made Singapore an economic powerhouse, creating an environment in which human ingenuity can thrive. He didn't tolerate corruption. He kept a tight grip on spending and pushed down taxes.

He knew the folly of weak money; the Singapore dollar looks like the Rock of Gibraltar compared with most currencies - including the US dollar, most of the time.

He pursued a vigorous housing programme that enabled people who didn't earn high incomes to buy their homes; his was a model for how subsidies need not lead to the housing-related disasters that have plagued the United States.

Singapore's healthcare system has provided comprehensive coverage to its people without the rationing, high costs and dicey care that characterise so many others.

Singapore's pension system avoided the pay-as-you- go trap that's hurtling those in other countries towards insolvency.

Under Lee's guidance, Singapore developed a real-life playbook for how an impoverished country can flourish.

Critics will tell you that Lee was no Jeffersonian democrat, and he wasn't.

But he allowed elections, even if he didn't give the opposition a lot of breathing room (though if he had, he would have won handily).

More important, under his leadership Singapore developed a thriving middle class, along with the civic institutions and habits that are crucial to a sustainable democracy.

Too many times we've seen that merely holding an election does not a lasting democracy make.

Singapore's political system is evolving in a way that bodes well for long-term stability.

Early in his political career, Lee shed his socialist sympathies and became a hardheaded pragmatist.

In the 1950s and 1960s, Lee demonstrated superb political skill in maintaining Singapore's independence in the face of real hostility from two immensely larger neighbours, Indonesia and Malaysia.

But Lee's influence extended far beyond his small country.

One wishes he could have been the leader of a country like Indonesia or China.

(He would have conducted US foreign policy better than almost all of our Secretaries of State).

He supported US efforts in trying to save South Vietnam from communist takeover by the North. Although the US lost that war, Lee argued that our long effort gave the rest of Asia the time needed to develop the strength to resist communist takeovers.

He strongly supported a robust US role in the region as a counter to the old Soviet Union and China.

To listen to Lee talk about the world situation was an enlightening delight.

During one of our most memorable visits, he recounted the story of his meeting with Deng Xiaoping soon after Deng had won the reins of power and was mulling over how to go about rebuilding China in the aftermath of Mao's horrific Cultural Revolution. Deng's trip to Singapore in 1978 was his first and only trip there.

He was stunned by what he saw in Singapore: a booming area populated by Chinese that was independent and politically stable. "How did you do it?" Deng asked Lee. Deng threw aside his itinerary and spent hour after hour in intense conversation with Lee.

One of our journalistic coups occurred in 2001, when Lee Kuan Yew kindly accepted our offer to become a Forbes columnist. It's so unfortunate that the civilised world has lost such a wise voice at this troubled time.

Steve Forbes is chairman and editor-in-chief of Forbes Media