From The Straits Times Archives: Past 'mass hysteria' cases in Singapore 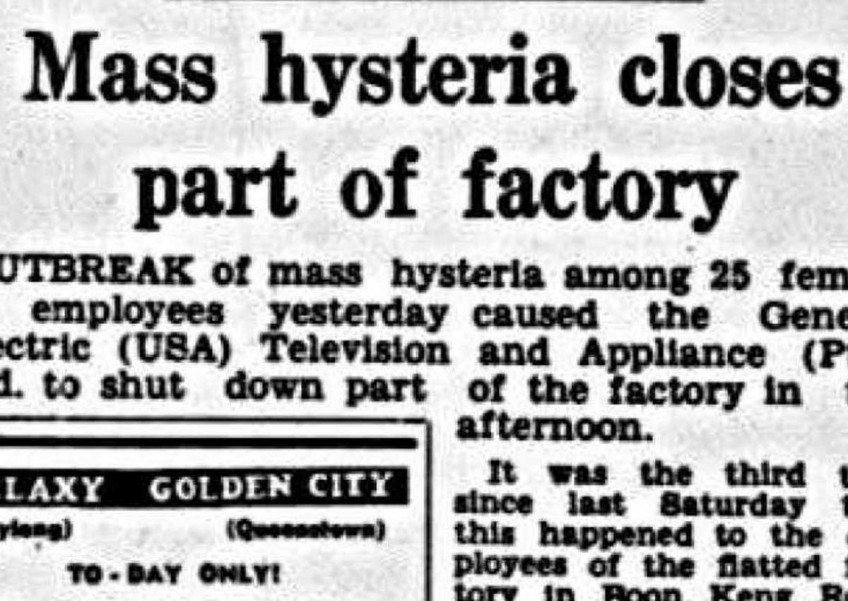 A headline in a Straits Times article about a mass hysteria outbreak at the factory of General Electric (USA) Television and Appliance in January 1973.
The Straits Times

SINGAPORE - Several schools in the Malaysian state of Kelantan have been plagued by incidents of mass hysteria over the past week, with students claiming to have seen ghostly figures.

To date, eight ustaz, a bomoh and Islamic traditional experts have been sought for their expertise in chasing away the "spirits", as the problem grew so serious that one school was forced to shut down temporarily .

The phenomenon of mass hysteria, while not new, has been rarely seen in recent times, although outbreaks were especially prevalent in schools and factories in Malaysia and Singapore throughout the 1970s.

Here's a look at some of the reported cases in Singapore.

One of the earliest reported cases of mass hysteria was medical in nature. Rumours had first spread on Oct 28, 1967, that eating pork caused koro - a retraction of the male sexual organ.

Panic ensued as an average of 80 people called daily at the outdoor dispensaries of government hospitals claiming to be suffering from the disease, said a Straits Times report on Nov 7.

A Health Ministry press conference was subsequently called to dispel the rumours and clarify that koro was not connected to consuming pork. A panel of medical experts pinpointing psychological fear as the main cause of the epidemic.

The epidemic was apparently so severe it "led to almost a standstill in the sale of pork both in markets, eating stalls and restaurants", the report said.

On Jan 13, 1973, a case occured at the company's flatted factory in Boon Keng Road when eight female employees became hysterical. There is no report of a second incident, but on Jan 17, a third incident was said to have happened with as many as 25 women on the factory's U-Board assembly line affected.

Part of the factory was subsequently shut down that afternoon.

One woman said in a Straits Times report: "It was frightening. The women went into a trance and started screaming."

Another said they had not taken the first incident seriously. "But it certainly gave cause for concern when another 12 became hysterical on Tuesday (Jan 16) and about 25 today (Jan 17)," she added.

Employees also claimed they saw visions of a teenage girl lurking in the washroom for several nights.

Bomohs and Buddhist monks held daily seances during the outbreak as incense was burnt and holy water sprinkled at two blocks of the factory.

About a dozen female workers were stricken by mass hysteria at the food company's factory in Litte Road, off Upper Paya Lebar, on Oct 4, 1973.

Pon Pon, which produced dried cuttlefish and employed 120 workers consisting mainly women, closed for the day immediately after its workers were taken ill at around noon.

Mass hysteria hit the operations room of the TAS headquarters in Exeter Road on Oct 20, 1977, as a group of women began screaming and struggling with those who tried to calm them.

A report said the incident occurred at around 4.30pm, when most of the day shift staff were about to leave work.

According to a TAS official, some went into a trance while others vomited and frothed in the mouth. They later said a "jin" had entered their bodies.

In a press statement issue on Nov 3, TAS said the hysteria affected 16 telephonists when one of them started screaming. One telephonist was taken to hospital because of a minor injury and discharged later that day.

Up to 30 Secondary 1 and 2 students in the school in Aljunied Road were affected at about noon on April 24, 1979. They were sent to hospital for observation while their classmates were told to leave school early.

It was later revealed in a Straits Times report on July 2, 1980, that 48 students went hysterical during the outbreak.

The report said: "For three days, a frightening 'epidemic' sent one student after another into frenzied trance-like states.

"While some cried, shivered and started eating the grass and empty glasses, others stared into empty space with open eyes while performing a Tai Chi type of dance movement called the Kuda Kepang, an ancient Malay wedding dance.

Twenty-eight students gave different accounts of legless apparitions which appeared before them.

Six years after the first wave of incidents, the company's Boon Keng factory again suffered an outbreak on June 20, 1979. At least 20 women were overcome by mass hysteria, with some sent to hospital.

The firm's doctor reportedly attended to the cases and sent those affected home after treatment.

The problem, which had been specially prevalent in labour-intensive industries (mostly electronics and textiles firms), warranted a closed-door discussion between the senior executives of various companies and the ministry on April 26, 1980.

It is believed the meeting emphasised the physical aspects of the problem and how to cope with them, rather than any medical or psychical aspects.

The ministry's industrial health division revealed in July the same year that it had investigated 13 mass hysteria cases, involving a few hundred factory workers, since the first outbreak in 1973. The other cases were not reported.