Stricter measures to step up security at big events 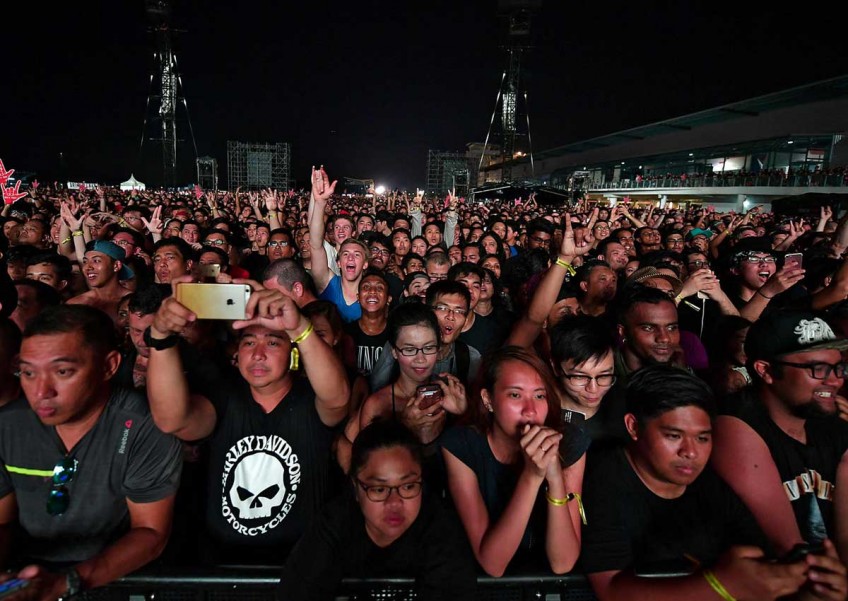 The crowd at American rock band Guns N’ Roses’ concert at Changi Exhibition Centre last month. Under changes to the Public Order Act introduced in Parliament yesterday, organisers of public events must notify police at least 28 days beforehand if they expect a crowd size of above 5,000 at any time.
The Straits Times

People attending large public events such as sporting matches or music concerts would have to turn up earlier for bag and security checks, following changes to the law tabled in Parliament yesterday.

There may also be more barricades and security officers present, if police require event organisers to impose stricter measures.

These requirements are part of amendments to the Public Order Act introduced in Parliament by Senior Minister of State for Home Affairs Desmond Lee yesterday.

Organisers of public events will need to notify police at least 28 days beforehand if they expect a crowd size of above 5,000 at any time.

He noted that if the authorities required bag checks to be carried out for a concert with 10,000 attendees, additional security manpower would be required to "expedite this and make sure there are no delays".

"This is safety, and there will definitely be some cost to participants," said Mr Scully. Ironman organises the annual Standard Chartered Singapore Marathon, which attracts a crowd of more than 50,000.

"Given the security environment and threats right now, nobody can say this is all unnecessary," said Mr Adrian Mok, managing director of HiVelocity Events.

The company organises the annual Sundown Marathon, which attracts about 30,000 runners.

After police are notified of large events, they will decide if the event should be declared a "special event", after assessing the risk of a terror attack or public order incident, the Ministry of Home Affairs (MHA) said in a statement.

"The police will issue directions to the event organiser to ensure appropriate security measures are in place," it added yesterday.

Private events, where attendance is by invitation only, will be subject to these regulations as well when they draw crowds of more than 10,000.

Events that may not attract such crowds, but which the police assess to face a higher risk of a terror attack or public order incident, will also be tagged special events, said the ministry.

If the changes to the Act are passed, event organisers that fail to notify police will be guilty of an offence, and can be fined up to $20,000, jailed for up to a year, or given both punishments.

MHA had signalled its intention to amend the law to boost security at large-scale public events in Parliament last week.

Mr Lee had said then that his ministry was mindful of the impact the changes would have on businesses, and would take a "practical approach" to keep costs reasonable.

He also said: "We seek the business community's understanding that these measures are necessary as a shared effort to keep Singapore and Singaporeans safe."

Mr Mok said security measures like bag checks would be inconvenient, but he does not see people complaining "when there is truly a threat to be worried about".

The proposed Act will also give the Commissioner of Police the power to reject applications for public assemblies and processions that involve foreigners with a political agenda.

"This will help prevent Singapore from being used as a platform by foreigners to further political causes," said the ministry.

The changes will be debated at the next Parliament sitting.