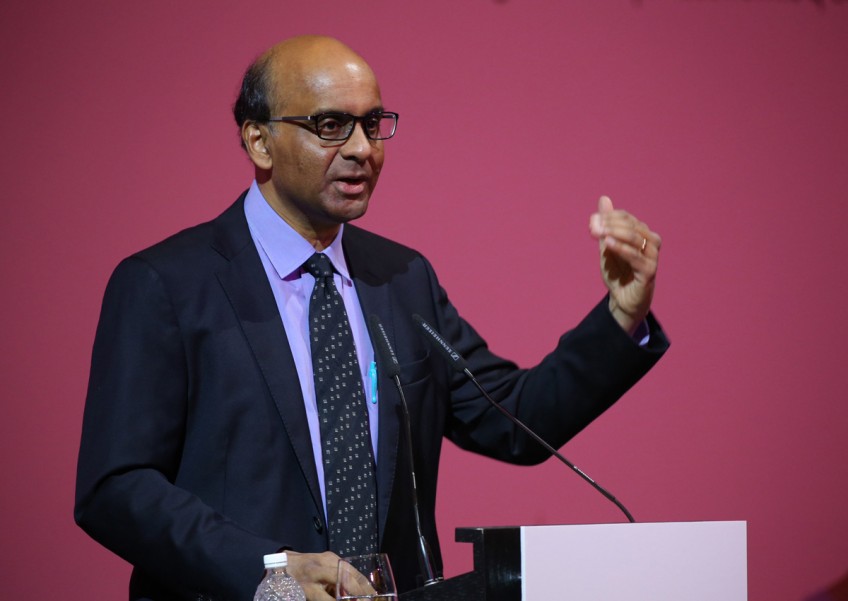 In periods of uncertainty, like in the aftermath of recent terror attacks by the Islamic State in Iraq and Syria (ISIS), there is a greater need for good leadership that would hold the centre even as popular pressure pushes politics to extremes, said Deputy Prime Minister Tharman Shanmugaratnam.

In a question and answer session at The Straits Times Global Outlook Forum with Mr Warren Fernandez, editor of The Straits Times, he said that recent attacks like the bombings and shootings in Paris and the downing of a Russian airliner in the Sinai Peninsula in Egypt last month have helped forge a "new degree of unity" in the fight against terrorism.

But in a less dramatic fashion, politics in the United States and Europe has shown a disturbing shift away from the centre.

"For a long time, the politics of Europe, of the UK and of the US was basically revolving around the centre-left and the centre-right," he said, citing the mainstream Labour Party and Conservative Party in Britain, and the Republicans versus the Democrats in the US.

But he said "if you look at the shifts of the last five to 10 years, the centre has weakened, the extremes have gotten stronger", pointing to the recent electoral gains made by the hardline National Front in France, Germany's anti- immigrant Pegida movement and the UKIP (UK Independence Party).

Offering a closer examination of the UKIP's performance in this year's general election, he said "you have to remember that although it didn't win many seats in the UK elections, it won a significant amount of votes and threatens now to take away votes not just from the Conservatives but from the Labour Party, that same base of working class votes".

Mr Tharman suggested that one reason for the rise of the extremist parties is the growing insecurity felt by a growing number of voters. Sectarian conflicts, the flow of immigrants and the lack of job security among the middle class, along with long-term worries about paying for pensions and healthcare all contribute to this insecurity. "That tends to feed in to a weakening politics of the middle," noted Mr Tharman.

To prevent a turn to a more reactive and inward-looking society, there is a need for strong political leadership that can unite people around "what they share in common, which were the values of the middle all along", he said.