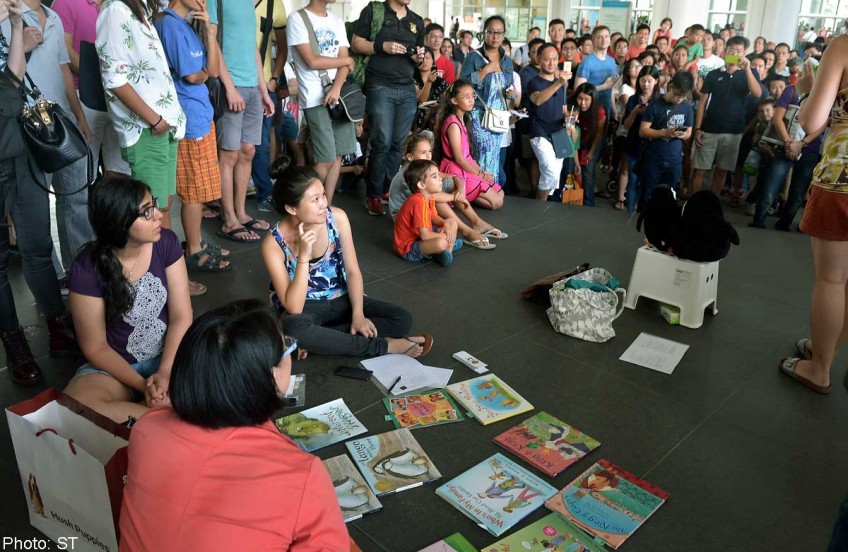 MOTHERS FOR BOOKS: Writer Jolene Tan and freelance marketer Germaine Ong organised yesterday’s event at the National Library Building where they shared copies of the books banned by the library.

Hundreds of people turned up at the National Library building yesterday and read several children books that were recently pulled from the library's shelves.

The event, known as Let's Read Together, was organised by two mothers, in a symbolic snub to the National Library Board's decision to ban several books which it had deemed to be not pro-family.

Writer Jolene Tan, 31, and freelance marketer Germaine Ong, 30, had brought some copies of the removed books, which included titles such as And Tango Makes Three and Who's in My Family?: All About Our Families.

They set up a small library corner for people to borrow the books.

About 400 people, including children, gathered at the atrium from 3pm yesterday and browsed through the books. Some parents read the books aloud to their young children.

A few also brought stuffed penguin toys and sat them down beside the humans as they read the books.

Ms Ong, who was at the event with her daughter and husband, told The Straits Times Online: "I learnt about different people through books. I want my daughter to learn empathy through reading too."

She added: "I want my daughter to know that every family is valid and not to feel sorry for people whose families are different from her own."

The two organisers had obtained a police permit to organise the event.

Ms Ng said she plans a public dialogue on the controversy sometime down the road.

When asked why it was not being held now, she replied: "Things are still fairly emotional."

The NLB's controversial actions have been supported by a Facebook group, Singaporeans United For Family, which has garnered more than 25,000 signatures.

I want my daughter to know that every family is valid and not to feel sorry for people whose families are different from her own. - Freelance marketer Germaine Ong, one of the organisers of the event