Supervisor pleads not guilty to robbery at Khairy's home 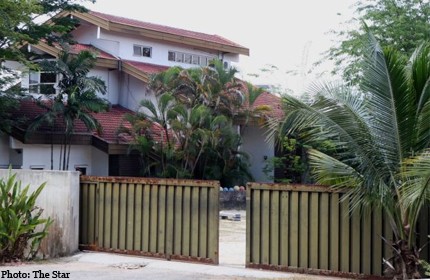 KUALA LUMPUR - A site supervisor pleaded not guilty in the Sessions Court here to committing gang robbery of valuables amounting to RM20,000 at the home of Youth and Sports Minister Khairy Jamaluddin.

Syed Ali Syed Ahmad, 36, was accused of taking two laptop computers, an iPad, several watches, a handbag, a briefcase, a cellphone and a gold chain while wielding a parang at Khairy's maid Sariani Mohd Hassan.

He was said to have committed the offence with two others still at large in Jalan Bestari in Bukit Damansara at 6.30pm on June 29.

Syed Ali, who was arrested on Aug 5, showed no emotion when the charge was read out.

Sariani, 38, had lodged a report on the robbery on the same day of the incident.

If convicted, Syed Ali can be jailed up to 20 years and whipped.

DPP Suzanne Tiyon Bimen applied to the court to set bail at RM20,000 in one surety.

Pleading for lower bail, Syed Ali said he had three school-going children and had to take care of his elderly and ailing parents.

Judge Dazuki Ali set bail at RM15,000 in one surety and fixed Sept 13 for mention.

Syed Ali failed to post bail and was taken to Sungai Buloh Prison.

Khairy and his wife, who live in the house belonging to his mother, were not in when the robbers struck. The only person in the house was the maid, who said the three men ransacked the place, including the master bedroom where most of the valuables were kept.