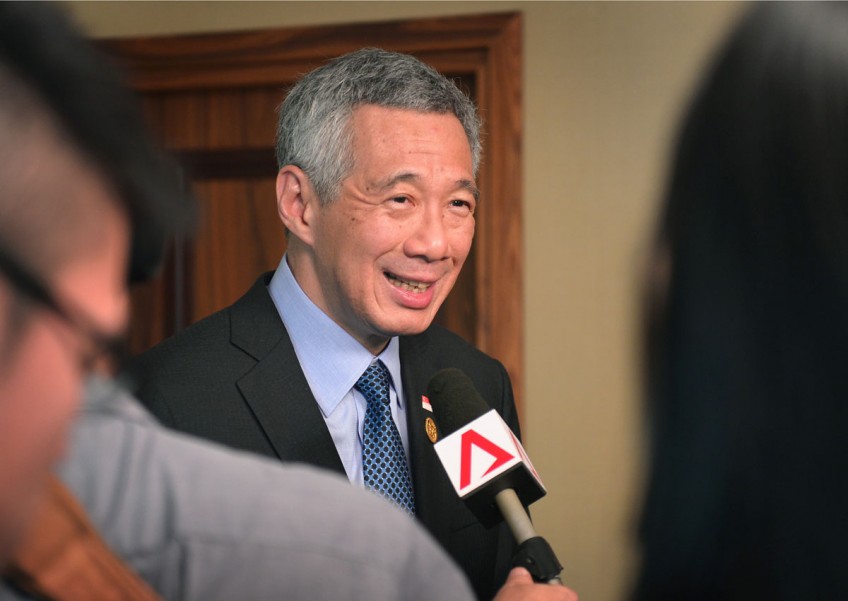 Prime Minister Lee Hsien Loong speaking to Singapore journalists at the conclusion of the G20 Summit in Antalya on Nov 16.
The Straits Times

The scourge of terrorism, as seen in the coordinated attacks in Paris on Friday, is a long-time problem that calls for a multi-pronged approach, Prime Minister Lee Hsien Loong has said.

It also requires countries to be resolute in dealing with extremists at home while cooperating closely with other nations so that terrorists are left "in no doubt that they are up against a formidable coalition of countries that are determined to stop them".

Mr Lee set out his thoughts on ways to combat this global challenge at the annual Group of 20 Summit of world leaders in Turkey. He said focusing efforts only on the extremists who are going to physically commit attacks is not enough."You have to deal with the ideology and the social fabric from which they could spring," he added.

Terrorism was high on the agenda of the two-day summit, which traditionally centres on the economy. The reason: the meeting took place just two days after terrorists ripped through Paris, killing at least 129 and injuring more than 350.

There are no easy solutions, Mr Lee said, noting that terrorism is a transnational problem as terrorists can cross borders freely. He said: "The fight belongs to all of us and we've to be willing to step up and stand up in solidarity with one another against the terrorists.

"We cannot avoid this problem, much less solve it, by hiding or by keeping silent, hoping the scourge will pass us by, on the other side."

The scourge of terrorism is felt keenly in Turkey, which shares a 900km border with Syria and is the main entry point for foreign fighters heading to join terror group Islamic State in Iraq and Syria (ISIS).

A bomb attack is also suspected to have brought down a Russian airliner over the neighbouring Sinai Peninsula on Oct31, killing all 224 on board.

In his speech, Mr Lee noted that South-east Asia, including Singapore, has not escaped the ISIS threat. The region is a key recruiting ground and enough have joined the militant group to form a battalion, he added.

Hence, Singapore has joined an international coalition against ISIS, and deployed a KC-135 refuelling tanker and an Image Analysis Team.

Its security agencies share intelligence with foreign counterparts, while border security has also been strengthened to stop would-be terrorists from entering the country.

Steps to foil ISIS have also been taken at home, Mr Lee said.

The Internal Security Act provides for terrorists to be detained without trial - before they do any harm.

"But we don't just lock them away and throw away the key. We strive to rehabilitate the detainees."

On the ideology and social fabric fronts, Singapore brings the different communities together to fight the terror threat, he said.

This includes the Government holding candid closed-door dialogues with community leaders of all races and religions, and sharing with them intelligence gathered.

Of the 70 people detained for terrorism-related activities since the Sept 11, 2001 terror attacks, about three quarters have been rehabilitated and released.

"Other than a handful, none have relapsed," he said. "I think it can be said to be a reasonably successful rehabilitation effort."