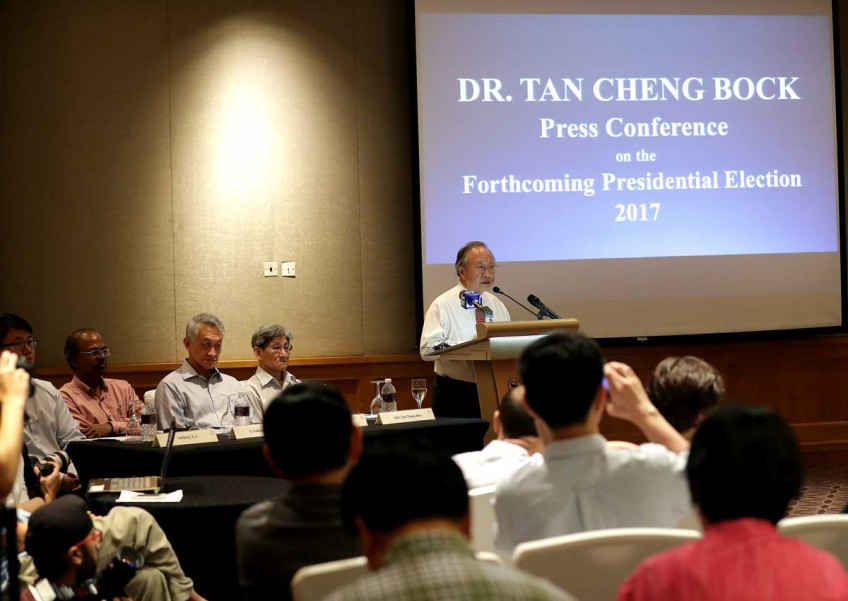 Former presidential candidate Tan Cheng Bock questioned the government's decision to include Mr Wee Kim Wee's term in deciding when to trigger a reserved election, saying that the next presidential election should be an open election.
The Business Times

SINGAPORE - Former presidential candidate Tan Cheng Bock said on Friday (March 31) the upcoming presidential election should be an open election which candidates from all races can contest, not one reserved for Malay candidates.

He called on the Government to explain why it decided to implement changes to the presidency this year, and questioned the Government's decision to include the term of former president Wee Kim Wee in deciding when to trigger a reserved election.

Dr Tan, 76, said the late Mr Wee was not elected, even though he performed the role of an elected president after changes to the presidency took effect in 1991.

Dr Tan also called on the Government to refer its decision to the courts.

"I am concerned that the changes were introduced to prevent my candidacy," said Dr Tan who had announced in March last year his intention to contest the coming election.

His remarks come nearly five months after Parliament approved changes to the Constitution to ensure that Singaporeans of all races are represented in the highest office in the land, and to update the eligibility criteria for presidential candidates.

The changes come after a review of the elected presidency by a Constitutional Commission appointed by Prime Minister Lee Hsien Loong.

One of the key changes, to ensure minority representation in the office, will see elections reserved for candidates from a particular racial group when no one from the group has been elected president for five terms.

Mr Lee told Parliament in November that the upcoming presidential election will be reserved for Malay candidates as there has not been a Malay president since the country's first president, Mr Yusof Ishak, died in office in 1970. The Government had started counting the five terms from Mr Wee's term, on the advice of the Attorney-General's Chambers.

Dr Tan also asked whether the advice the Government got from the Attorney-General's Chambers (AGC) on when to start having a reserved election was in sync with the spirit of the recommendations of a Constitutional Commission to review the elected presidency.

Mr Ong, who took office after Mr Wee stepped down, was the first president chosen in a presidential election.

Dr Tan said Mr Wee's powers were given to him by Parliament, and "not by the people".

He also said there was no proper explanation given during last November's debate in Parliament on why the Government had started counting the five terms from Mr Wee's term.

"When you listen to the exchanges going on, you find that something is amiss," he said. Without citing names, he added that government ministers explaining the changes had "thrown statements" at questions asked and "threatened" those who challenged them.

He added that the responsible thing the Government should do is to refer the matter to the courts.

When asked if he would launch a court challenge himself, Dr Tan said he wanted to keep his options open.

Under the recent constitutional changes, eligibility criteria has also been tightened and now require candidates drawing on their private sector experience to have been the most senior executive of a company with at least $500 million in shareholders' equity.

Dr Tan, who qualified in the 2011 election on account of being non-executive chairman of Chuan Hup since 1991, will no longer qualify on this count.

Asked if he would still try to contest in the election, Dr Tan said he wanted to serve the people and would do what he believes in.

He added that he had been deemed eligible in the 2011 presidential election based on his credentials.

"But if you want to define the presidency by money, I'm not sure what sort of legacy I'm going to leave to my children or grandchildren," he said.

At public forums on the elected presidency held last year, some people had brought up the point, asking if the changes might seem aimed at denying candidates, such as Dr Tan, a chance to run.

But Law and Home Affairs Minister K. Shanmugam had said the changes were to improve the system for Singapore's long-term benefit, not to bar certain individuals from standing.

Responding to Dr Tan's press conference, a spokesman for the Ministry of Communications and Information said: "This matter has been considered and debated extensively for more than a year. A Constitutional Commission chaired by the Chief Justice undertook extensive consultations on the Elected Presidency, including public hearings.

"Dr Tan did not participate in those hearings or give his views to the commission. The Government gave its response to the commission's report in a White Paper, and Parliament debated the matter over three days, before passing amendments to the Constitution. Dr Tan has not raised any new points that require response."

The review came 25 years after the elected presidency was introduced.

The Constitutional Commission led by Chief Justice Sundaresh Menon studied over 100 written submissions by groups and individuals, and invited 20 of them to speak at public hearings.

Dr Tan Cheng Bock lost to President Tony Tan Keng Yam by 7,382 votes, or 0.35 percentage points, in the four-way contest for the post in 2011. The other candidates were Mr Tan Jee Say, who went on to found opposition party Singaporeans First, and former chief executive of NTUC Income Tan Kin Lian.