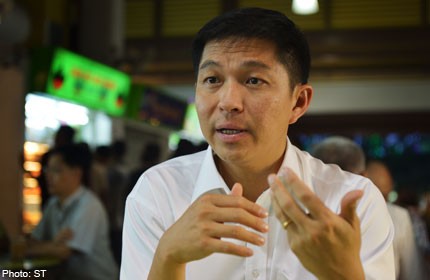 In Part 1 of the interview, Mr Tan Chuan-Jin talks about the SMRT saga and his experience putting together a National Day Parade.

Q: We celebrate National Day this week. There's been criticism of the parade organisers this year, especially over the theme song.

It happens every year! Perhaps criticism is amplified, as more platforms become available.

Q: You organised the National Day Parade in 2009, when you were still in the Singapore Armed Forces. Is this still a worthwhile task, when people are out there throwing stones?

That year, we got (local band) Electrico to perform. And people were complaining: Why a band, and why this type of song? People will question and criticise regardless of what you're doing. In fact, my first experience with the NDP was as a young captain in the SAF, responsible for managing the entry and exit for one of the gates of the national stadium. I had a negative experience. Some of the groups weren't very cooperative and didn't always follow the agreed instructions.

So I said to myself at the time, "If I can help it, I don't really want to be involved again." But my views changed over the years and I actually found it a very meaningful exercise.

In 2009, what my team did was to go back to basics by revisiting the whole raison d'etre for organising NDP. It changed our perspective; it wasn't just about organiszing the event but to really get Singaporeans to celebrate and reflect. I realised that my preoccupation wasn't the audience at the floating platform. They were converted - that's why they balloted for tickets. It's actually rest of

Singaporeans who are thinking: "Ah, another propaganda event." Or: "Long weekend - let's go somewhere." How do you get them to reflect on the meaning of National Day?

So we had a lot of outreach to the public. The Pledge Moment - getting Singaporeans everywhere to recite the pledge at the same moment - was one simple but meaningful way to engage the larger population. Even though you are not at the parade, in that half a minute when you recite the Pledge, you think about what it means.

The following month, (Nominated MP) Viswa Sadasivan tabled a motion calling on Parliament to reaffirm the principles of the Pledge. That was remarkable because that was exactly what we wanted - people talking about the Pledge and asking what it is.

Q: What do you think of this debate over whether we need a theme song every year?

Well, you might also ask: Do we need a new theme every year? After all, it's all variations on the same main idea, right? Coming up with different themes sometimes gives you a slightly different angle to look at an issue. This year, for example, I find "Many Stories" an interesting theme to think about.

As for theme songs, "Home" will continue to be a favourite for a lot of people and it will be hard for any new song to measure up to it. But having a new song allows Singaporeans to exercise their creativity to come up with another way for the song writer and the team to express how they feel about Singapore today. Sometimes it works well, sometimes it works less well.

Q: Is it going to become harder for people to say yes to being part of NDP, given the criticism they will have to live with online?

It will weigh on some people's minds. Will it stop people from coming forward? I don't think so. A lot of people who are involved are very passionate about being able to contribute, and it's something that they will eventually learn to take in their stride.

Q: You entered politics in 2011. How would you describe the journey so far? Has anything about your thinking changed?

For me, the purpose of doing something is always the most important part. And my purpose has not diminished. Having people involved in public service, whether at the civil service level or the political level, is important because the issues we grapple with are complex. Every decision has ramifications, good or bad, and it's a constant balancing act on multiple dimensions, while the ground is also changing. Where is the right balance when there are so many different constituents, stakeholders and views?

From the Our Singapore Conversation, one thing we found useful was having Singaporeans talking to one another and actually realising that there were many divergent perspectives on any issue. Even one person might have divergent perspectives when he puts on different hats. Housing is one example. If you're a parent, you're anxious that housing prices will go up for your child. But then you're also a house owner, you're kind of worried about the value of your own property. That's inherently contradictory. But that's real life. If anything, the challenging nature of the work has strengthened my conviction that this is something important to do.

I'm also quite inspired by the people I meet from all walks of life. I meet many Singaporeans who contribute generously to make things better for others. I also make it a point to talk to people who may be low income or may have problems. In part, I also want to find out whether they are being paid their CPF or if they are getting their overtime pay! In some cases, they do have issues, and I've encountered people who are in really tragic situations. And we do link them up with help. But you also realise that many people have a lot of dignity, and they find their own ways to stand on their own two feet.

Q: It's just about a year since you took over the Manpower Ministry. What does it feel like to be put in a position where you're ultimately responsible?

I don't feel that it is different. The responsibility you bear remains the same. Just as when I was holding different appointments in the SAF, you were solely responsible for a particular military operation or unit, and the buck stops with you. So in a way, I'm used to holding those responsibilities. And even when I was Minister of State, when DPM Tharman (Shanmugaratnam) was Minister, the responsibility didn't diminish just because you weren't the main person.

Of course, ultimately, someone makes the call. But a lot of it is very much a team effort. The way I convey it to my team is: We have to leverage the collective strength and wisdom of everyone. It's not one person deciding and that's it, everyone follows. I am responsible but it's with the team's support and backing.

Q: What would you say were one or two of the more difficult decisions in this past one year?

The strike (by SMRT bus drivers in November last year) was something I had to deal with. It was an issue that came to a head very quickly. Was it difficult? I didn't look at it as difficult. I'm not saying that it was easy. But I look at things this way. Crises will always happen from time to time. You can't be flustered. You just have to find out what the situation is, what the options are, determine the timeline of your actions, and resolve it.

Q: Was it clear early on that it was not a legal strike?

From the onset, the first priority was to find out what exactly was happening. You get feedback, you get information from the ground. At first glance, it did appear so, but you have to make sure that, indeed, it id what it appears to be - that the information was accurate. People said then: "Why didn't you declare it an illegal strike?" We could have declared it earlier, but you want to be ready as it will set in motion a series of actions. You had to make sure that the different agencies were ready, they all understood what it meant, and that the time was right to move.

Q: Once the facts were established, it was fairly automatic?

Once that was clear, we then worked out the steps that we should take, and how best to implement them. We were also anxious about the ramifications for other sectors. You also look at contingencies. What if this or that happened? Are you ready to deal with it?