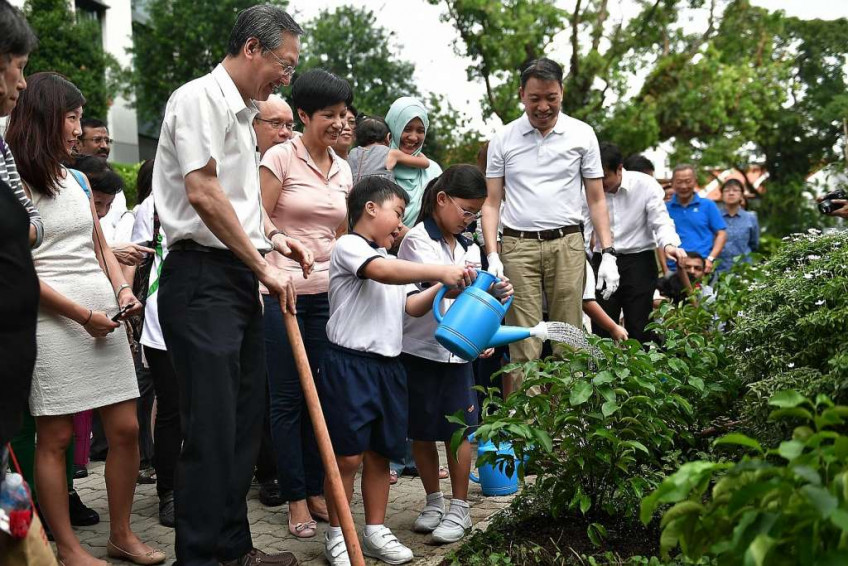 Cantonment Primary School pupils watering some of the shrubs planted in Tanjong Pagar GRC yesterday to mark two years since Mr Lee's death. With them are (from left) Radin Mas MP Sam Tan (foreground), who is also Minister of State in the PMO and for Manpower; Ms Indranee; and fellow Tanjong Pagar GRC MP Melvin Yong.
The Straits Times

In his 60 years representing Tanjong Pagar, Singapore's first prime minister Lee Kuan Yew paid close attention to its environment and made it a point not to miss its annual Tree Planting Day.

Yesterday, MPs for Tanjong Pagar GRC, grassroots leaders and 100 residents planted 13 species of shrub in two areas of the constituency, in a nod to the late Mr Lee.

The plants were favourites of Mr Lee and his late wife, Madam Kwa Geok Choo, and Tanjong Pagar GRC MP Indranee Rajah made the selection with the help of the Istana's plant curator.

Ms Indranee, who is also Senior Minister of State for Finance and Law, described the simple ceremony as a "happy observance" meant "not to remember death and passing, but what his life stood for".

The GRC will commemorate Mr Lee's death anniversary every year with similar ceremonies, she added. Mr Lee died on March 23, 2015, at the age of 91.

Ms Indranee also announced an annual national competition for young Singaporeans to offer ideas to improve the country. Its purpose is to get them to start thinking about the future of Singapore, which was Mr Lee's lifelong commitment, she said.

More details will be announced later. The contest will be held between September, Mr Lee's birth month, and November, when Tree Planting Day is usually held.

Mr Lee began Tree Planting Day in 1963 to create a greener Singapore. Every year, he planted a tree until November 2014, which was also the last time he appeared in public. A species that had pride of place at the revamped Tiong Bahru community club is the Vallaris glabra, also known as the bread flower.

Mr Lee had specifically asked for it to be planted in the Istana garden before he died.

At Duxton Plain Park, next to the Pinnacle@Duxton housing blocks, the Pleiocarpa mutica was planted. A favourite of Mrs Lee, it is widely planted on the Istana grounds. Species that attract butterflies were also planted there so that over time, the area will become a butterfly garden.

Ms Indranee also read out a message from Minister in the Prime Minister's Office Chan Chun Sing, the anchor minister for the GRC.

Said Mr Chan, who is on an official visit to Vietnam with Prime Minister Lee Hsien Loong: "Planting a tree is a reminder to all of us of what it takes to build our country, one tree at a time, one step at a time, but always doing it together."

Pet business owner Shelby Doshi, 32, who lives in Pinnacle@Duxton, attended the ceremony held near her home.

She said: "It is well known that Mr Lee had a passion for nature, so it is fitting to do this in his memory, and it is a good tradition to carry on."

Meanwhile, ministers and MPs went online to pay tribute to Mr Lee's legacy in Facebook posts, while social media users posted photographs of Mr Lee or images with his quotes.

At Gardens by the Bay, some visitors attending an exhibition on the work that had gone into crafting a future memorial to honour Singapore's founding fathers and their values suggested ways to remember Mr Lee.

Administrative executive Nisha Ramdzan, 27, added that simple ceremonies like the one held in Tanjong Pagar are good because they can serve as a gathering point for those who wish to commemorate Mr Lee's life.

Similarly, retiree Goh Ngoh Khang, 73, said in Mandarin: "There is no need to organise large-scale events, as those who want to mark the day will find their own way to do so."