Tank top that went viral is now up for eBay bidding

The tank top that recently went viral with the words "Gay But Not Yet Equal" is making a reappearance. And this time, it's up for grabs on eBay.

After being spotted at the SAFRA gym in Mount Faber a few weeks ago by a few club members who were unhappy with the shirt's message, the tank top and its owner Mr Jee Leong Koh caught the media's attention raising questions about whether such an item of clothing should be allowed at the recreational club for National Servicemen.

The EnergyOne gym responded by dismissing the complaints, and Mr Koh was grateful to be greeted by a show of online support for him wearing whatever he wished.

Now, the gym user and Singaporean poet is hoping to raise funds for a cause he believes in. 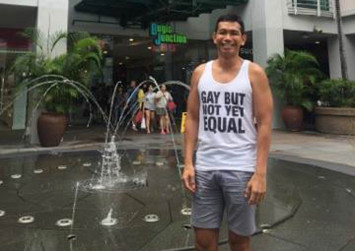 "I'm putting up four of the original tank top for bidding on eBay, to benefit Singapore Unbound. The starting bid is USD50 (S$68). Please make a bid by clicking on this link," he said.

The tank top, designed by New Yorker Mark Yeo, is a medium-sized white shirt with black text. The words on the back read: "Equality for All."

The proceeds will be going to Singapore Unbound a New York-based literary non-profit that "champions freedom of expression and equal rights for all," according to Mr Koh.

On the bidding page, the poet describes the top as, "Gently worn, freshly washed, lovingly ironed."

According to one of his Facebook posts, Mr Koh has a boxload of the shirts, which is probably how he is able to put up four tank tops all at once for bidding.

The tank top's bidding page description also contains a message from Mr Koh himself: "Get a memento of the tank top affair. Wear it about proudly. Support gay equality. It's a talking piece."

And judging from the response the garment got at the gym a mere couple of weeks ago, regardless of who the shirts go to, they'll be talking pieces indeed.