Tasers only used when lives under threat 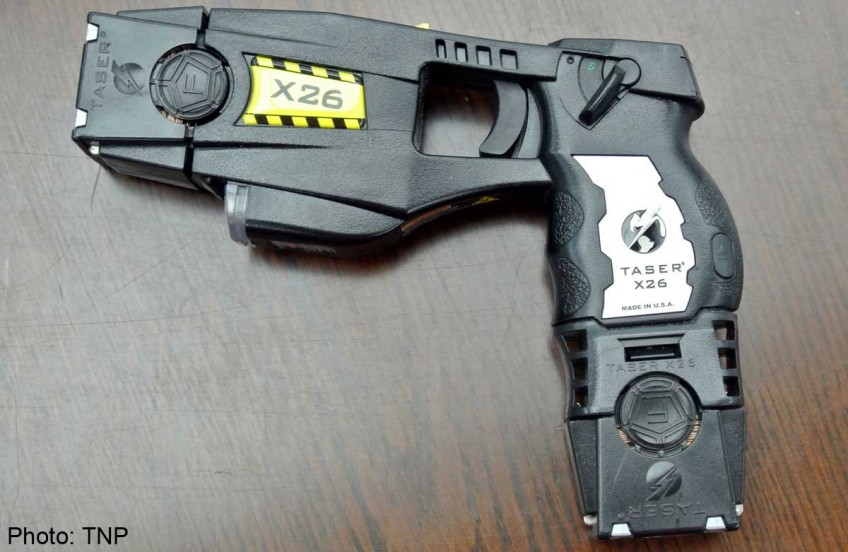 SINGAPORE - Being Tasered is extremely painful and can immobilise a person instantly.

Indeed, it feels like thousands of nails being hammered into the body, said Senior Staff Sergeant (Sgt) Chang Kam Sing. Because of this, the 42-year-old police officer will use his Taser only when lives are threatened.

The Taser is an electroshock weapon that discharges a 50,000-volt charge though the body when fired.

Earlier this month, Senior Staff Sgt Chang almost had to use it for the first time in his 23-year career when responding to a domestic dispute.

Speaking to The New Paper last week, he said: "People who have been Tasered cannot move at all. They cannot stand straight and cannot even sit straight. They will definitely fall back."

On July 3, the officer with Bukit Panjang Neighbourhood Police Centre was on his rounds in a patrol car with his colleague, Sgt Niaz Mohamed Ghazali, 24, around 3.30am, when they were asked to attend to a family dispute.

A woman had called the police saying that her husband was behaving violently and was threatening to hurt her and their three children.

The eldest is in secondary school, while the youngest is only a few years old.

The officers arrived at the five-room HDB flat in Bukit Panjang about five minutes later.

As he did not hear any shouting or quarrelling, Senior Staff Sgt Chang initially thought that the dispute between the couple in their 40s was over.

The wife, who appeared moody and was silent, let the officers into the living room. Her husband was also there.

One of their children, a boy, who appeared to be about 10 years old, quickly walked away to join his siblings in the bedroom.

Senior Staff Sgt Chang recounted: "I could tell from the husband's face that he was drunk. And I could smell the alcohol from him even though I was standing about 3m away.

"He was standing quite steadily and like his wife, did not say anything to us."The officer tried to talk to the man to find out what had happened.

Suddenly, the husband made his way to the kitchen door, yanked off a dog fence and smashed it onto the floor.

He then stormed into the kitchen and returned seconds later holding a chopper with a 15cm-long blade.

He shouted and pointed the weapon in a hysterical manner at his wife and the two officers.

Senior Staff Sgt Chang immediately asked the wife to stand behind the officers and ordered the man to put the chopper down.

The police officer recounted: "I was not scared, but was very worried for everyone's safety. The first thing that went through my mind was that I needed to stay calm and get him to put the chopper down. He was about 3m to 4m from where we were."

He told the man several times to drop the chopper, but the man took half a step towards them instead.

That was when Senior Staff Sgt Chang drew his Taser gun from its holster and pointed it at him.

Senior Staff Sgt Chang recollected: "I felt calm and repeated my order of asking him to put the chopper down.

"All this took place within around a minute. He immediately threw the chopper into the kitchen when he saw the Taser gun - maybe he thought it was a revolver.

"After drawing the Taser gun and issuing one final warning to the man, I would have fired it had he continued to behave aggressively and waved the chopper."

The two officers then handcuffed the husband, who did not struggle.

Said Senior Staff Sgt Chang: "As police officers, we need to remain calm and composed in all situations. We have to think and act fast to resolve incidents, especially in situations when public safety is threatened."TASERS IN THE POLICE FORCE

The Singapore Police Force (SPF) first implemented the use of Tasers at two neighbourhood police centres (NPCs) in July 2005.

Initially, only officers from Geylang and Bukit Merah NPCs were issued with the Taser X26 guns.

These non-lethal weapons are now deployed to all NPCs islandwide.

They are capable of temporarily disabling a suspect by sending a 50,000-volt charge though the body. A suspect would be instantly incapacitated once he is Tasered.

This is because two barbed darts from the gun will latch onto the suspect's skin and send volts of electricity through the body, blocking the central nervous system.

A police spokesman told The New Paper that front-line officers are currently equipped with Tasers, revolvers, batons and other equipment.

She stressed that there are strict guidelines on the use of Taser guns.

She added that Tasers had been used in incidents involving subjects who were physically violent or were armed with dangerous weapons such as knives or broken glass bottles.

She said: "The deployment of Tasers in these incidents allowed the subjects to be subdued and the situation was diffused without causing serious injuries to anyone.

"There have been no deaths or serious injuries linked to the use of Tasers by the SPF."

While sniffing glue, a 50-year-old cleaner hit a police officer and was Tasered.

A police spokesman said the man was later arrested for inhaling intoxicating substance and using criminal force on a public servant.

A 47-year-old man was Tasered and arrested after the police received a call about drunk men causing a nuisance at around 4pm on March 31.

A 31-year-old man stripped naked in public and caused a commotion at Bukit Panjang.

A policeman saw him and told him to get dressed, but the man refused and charged at the officer. He even threw a punch at the policeman's face, but the officer managed to evade the blow.

When the man continued to be aggressive, the officer took out his Taser gun and threatened to use it. Later, two more policemen arrived at the scene and helped apprehend the man.