Taxi driver in former banker's murder case to be charged on Friday: KL 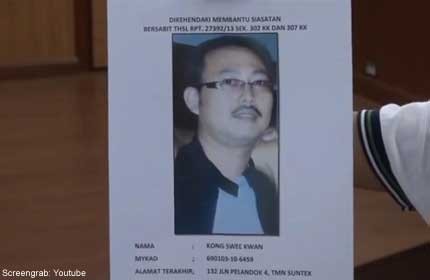 KUALA LUMPUR - The taxi driver who transported the killer of Arab Malaysian Development Bank's first managing director Hussain Ahmad Najadi is to be charged at the Sessions Court today.

The 44-year-old cabbie, who was picked up at a coffee shop in Sri Petaling on the night of July 30, had his initial week-long remand period extended when it ended on Aug 6.

The main suspect, identified as Kong Swee Kwan, 44, who has two criminal records for possession of stolen goods and an extortion-related case, is believed to be in hiding.

Besides the taxi driver, three more persons detained to facilitate investigations -- a 42-year-old man and two women aged 47 and 61 -- will see their remands expire tomorrow and on Monday respectively.

Hussain, 75, was shot dead and his wife, Chong Mei Kuen, 49, wounded when a gunman shot at them at the car park of the Kuan Yin temple in Lorong Ceylon here.

Also to be charged today is a police corporal attached to Sentul police headquarters, who assisted in the escape of a Nigerian drug dealer from the Jinjang lock-up, Ku said in a comment to the New Straits Times yesterday.

The cop, who was detained on Monday, the same day of the escape, had his remand period end yesterday.

The 52-year-old policeman, with a history of misconduct and disciplinary problems, is expected to be charged for soliciting money as an inducement to release a detainee from a lock-up.

Police are on the hunt for escapee Osuji Kelly Prince, 25, who was arrested on Aug 2 for possession of drugs worth nearly RM9 million (S$3.5 million).