Teacher dies after being shot 9 times at traffic junction 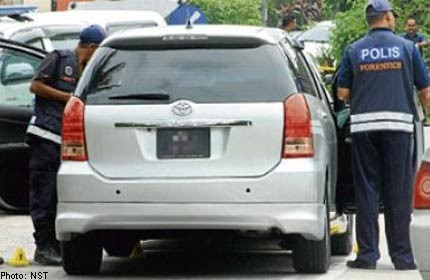 A police forensics team checking the victim's car at the scene of the shooting in Simpang Empat Keladi, Kulim.

KULIM - A secondary school teacher died after he was shot nine times at point-blank range at a traffic-light junction near Simpang Empat Keladi near here yesterday.

K. Shanmugam, 45, from Taman Bidara, had stopped at the junction at 12.20pm when two men on a black Yamaha LC motorcycle approached from behind the left side of the car.

A police spokesman said one of them took out a gun and fired nine shots at the victim.

The shooter was believed to have used a 9mm automatic pistol based on bullet shells found at the scene.

"We are investigating the motive," said the spokesman.

He urged those with information on the case to contact the nearest police station.

Yesterday's shooting was the third involving teachers in the past week.

In the first incident, Hashim Mat Zain, a senior assistant of SK Beris Panchor, was gunned down while leaving the school in his car last week.

The victim, 43, was found dead with three gunshot wounds after his car crashed onto the steps of a house about 300m away from the school.

In the second incident, teacher Mat Zaki Hashim, 35, sustained serious injuries after being shot in the neck in Kampung Kubang Panjang, Pasir Mas, on Friday.

He was warded at Raja Perempuan Zainab II Hospital.