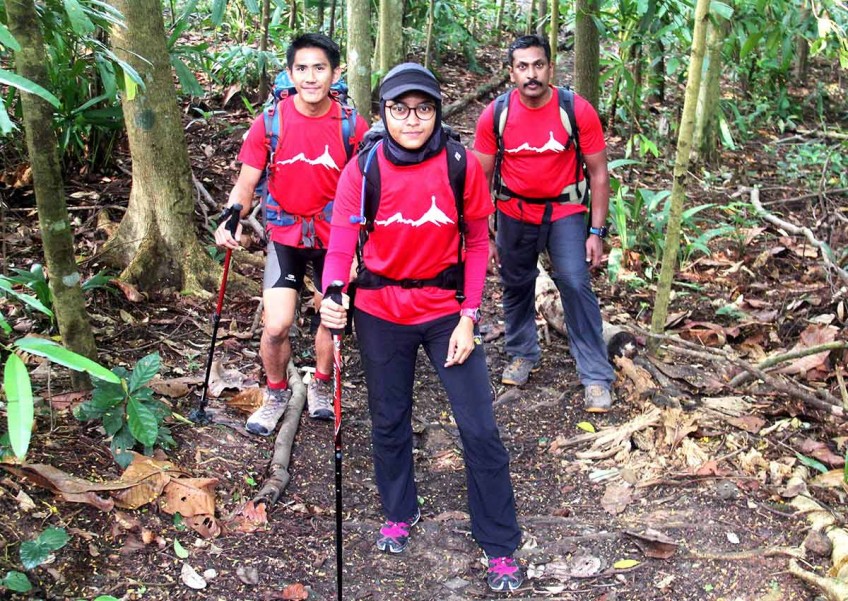 Mr Jeremy Tong (left), Ms Yusrina Ya'akob (centre) and Dr Arjunan Saravana Pillai (right) at one of their training sessions at Bukit Timah Nature Reserve on Sunday. The three, who are gunning to be the first Singaporean team since 2009 to reach the top of the world's tallest mountain, have been training since last January.
NTU Singapore

Teacher Yusrina Ya'akob has a second chance to give Singapore the present she had been planning for its 50th birthday.

Two years ago, she was the co-leader of Aluminaid Team Singapura Everest, which saw its ascent up the mountain cut short by an avalanche. Her team wasat the 5,500m mark, more than halfway through the 8,848m climb.

In June, Ms Yusrina and two friends are hoping to become the first Singapore team since 2009 to reach the summit of the world's tallest mountain and plant the country's flag.

The 30-year-old is currently pursuing a postgraduate diploma at the National Institute of Education (NIE). She will be joined by Dr Arjunan Saravana Pillai, a teaching fellow at NIE, who has more than a decade of climbing experience, and 26-year-old Nanyang Technological University sports science and management graduate Jeremy Tong.

"We hope this will encourage others to take the first step and achieve their dreams," said Dr Saravana, 47.

Read also: Singaporean drives from Singapore to Mount Everest in his Nissan GT-R

The 2015 avalanche, which forced Ms Yusrina's team to abort its climb, killed more than 15 other mountaineers. Her new team is not underestimating the task and will count on the members' experience and preparations.

Since last January, they have trained up to five times a week by climbing up 40-storey buildings and carrying 20kg backpacks while hiking around the Bukit Timah Nature Reserve, said Ms Yusrina, who is also aiming to become the first female Malay-Muslim Singaporean to reach the top of Everest.

"You can never be trained enough for Mount Everest," she stressed. Still, their attempt could be derailed by poor weather.

All three have taken between two and three months of unpaid leave for this mission, which Dr Saravana described as the "epitome of achievement" for all mountaineers.

The team also managed to raise more than $190,000 through two runs and from sponsors.

Read also: This 16-year-old Malaysian made his way to Everest, on his own