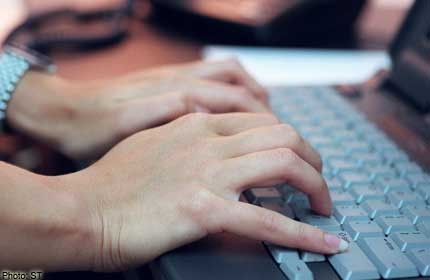 SINGAPORE - In an increasingly digital world, teachers should help students be responsible for what they say and do online.

Two professors from the National Institute of Education (NIE) believe that while more young people are congregating online, it takes more than words and opinions to be fully engaged in discussions on social issues.

Handling "online conversations" requires a set of skills and values, such as the ability to communicate well and to think about consequences before posting on cyberspace.

"Given the increasing popularity of social media among the young, we need to help them be responsible for what they say and do online," said Associate Professor Mark Baildon.

He and Assistant Professor Ho Li-Ching carried out a study in 2010 - believed to be the first to look at how youth here discuss civic matters online.

They chose four websites, after narrowing down from a list of 20 Singapore-based ones which likely attracted younger readers.

The sites were: Youth.sg, an online portal that made its debut in 2006 with support from then-Ministry of Community Development, Youth and Sports; citizen journalism website Stomp; online student publication The Kent Ridge Common; and a personal blog of student activist Kwan Jin Yao, 22.

The professors focused on the way the issue of immigration was discussed across the four websites, through articles, forum posts and even comments.

All the sites had constraints on what was considered appropriate, although each approached the issue of immigration differently, they found.

Stomp's language was more "emotive" and views were based on personal experiences.

The blog of Mr Kwan sought to provide "balance" and a range of perspectives, while Youth.sg looked at issues in a largely "positive" light.

"We want students to be engaged, participatory, empowered citizens," said Prof Ho in an interview with The Straits Times.

"As educators, we are asking ourselves how well schools are preparing them to be engaged in fruitful discussion online, given that such spaces form an increasing part of their lives."

Prof Baildon, who is also deputy head of NIE's Humanities and Social Studies Education Academic Group, added that schools can incorporate lessons on online engagement and issues of civic importance from as early as primary school.

Both professors plan to expand their work on online discourse and look at other issues, like whether online platforms, which are mostly English-language, favour certain groups of speakers over others.