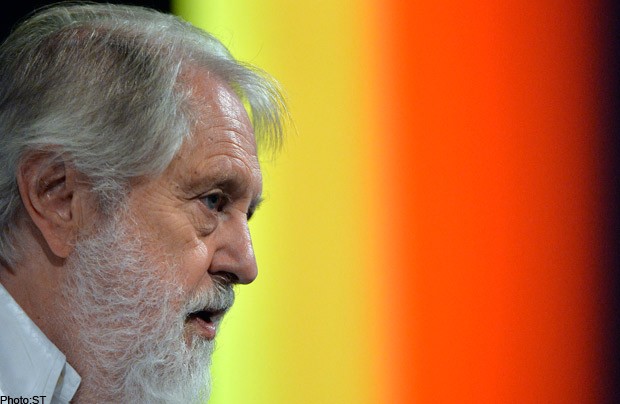 When British education policymaker David Puttnam visited a school one day in 1998, he was aghast to find a rusty teaspoon in its staff room with a piece of plaster on it with the words: "Mr Jones. Do not touch."

Worse, says Lord Puttnam, the Mr Jones in question was not a quirky person. His colleagues wrote their names on their individual tea bags, fearful that others would nick them.

Recalling this to me last Saturday at the Lasalle-SIA College of the Arts here, the 72-year-old says: "Of the three careers I've had - advertising, cinema and education - that was the greatest shock I've had.

"These teachers were working in conditions which no other professional sector in Britain would have tolerated for a moment. Yet they thought that was the way it was."

You may know him better from his films which won 10 Oscars in all, including Midnight Express (1978), Chariots Of Fire (1981) and The Killing Fields (1984). But since 1998, the Labour supporter has been helping Britain overhaul the way it teaches, after being invited by then Education Minister David Blunkett to arrest the rapid attrition among teachers.

His big idea, then, is that the entire culture of teaching as everyone knows it has to change, by getting teachers to stop dictating to their charges and start having lively classroom dialogues with them. "It's not just about literacy and numeracy," he stresses. "It's about teaching everyone to be agile, adaptable and resilient."

He was in town last week to speak at the inaugural World Academic Summit, which was co-organised by the Nanyang Technological University and university ranking body Times Higher Education. He also gave a talk at Lasalle- SIA, whose film school is named after him and whose students he teaches, mainly through video-conferencing from his home in Skibbereen, Ireland.

But back to teaspoons and tea bags. "The level of infantilism was ridiculous," huffs Lord Puttnam, who began boosting teachers' morale by founding Britain's National Teaching Awards in 1998 and then the National Teaching Council in 2000. The humble married father of two notes sadly that Britain knighted its first teacher in 2008.

To change teaching culture, he organised a swish roadshow for them to spread the message that they had to change the way they taught, and the way they thought about their job. He recalls: "We gave them nice coffee and chairs. They couldn't believe that they were being treated like adults. And they were the people in whom we were placing our whole future."

He sympathises greatly with them because "they are attempting to teach a generation of people about a world they themselves don't understand". In contrast, he says, when he put himself through night school in the 1960s, he was convinced that his skills would last him for life. These days, he notes, a person would be lucky if his skills are relevant after 10 years.

The highest hurdle by far, he notes, is that most educators - particularly those in universities - do not want change to happen on their watch. He says: "The most dangerous thing of all that I hear from university leaders and faculty is, 'Yes, of course we need to change. But not at the moment, as it's going to affect my retirement.'"

They will not even consider questioning a don's tenure, or length of service, which in many instances can be interminable. Worst of all, he notes, when crises hit universities, their leaders tend to just shift the assessment goalposts, claiming that changing times call for different measures of their performance.

He knows a lot about this because he has also been chancellor of two British universities - Sunderland University (1997-2007) and OU or the Open University (2007 - September 2013). When he arrived at newly opened Sunderland, it was a converted polytechnic and its eponymous city was "an economic catastrophe" reeling from the loss of its shipbuilding industry. He was disgusted to learn that some of his faculty were rubbing their hands, thinking they could now do more research than teaching.

He quickly focused everyone's energies on rejuvenating the city by working with new employers like carmaker Nissan to make his students job-ready and future- proof.

Similarly, the OU roped him in to help it move from giving courses via TV to teaching them online. He hired, not an academic, but Mr Martin Bean of Microsoft to be his vice-chancellor.

The OU drew the same number of applicants in its first year of operations more than 30 years ago. In both cases, he stresses, he worked in situations "ripe for revolution" and so doubts that universities in general will change without a crisis forcing them to do so.

Still, he says, those who do want to change can do so by: L Taking the fear out of learning, because fear is for controlling, not nurturing, others. F

or example, the night before he began filming a new movie, he would write a letter to his cast - actors are notoriously insecure - thus: "Everything you do before the camera is good.

ou're here because we knew what you could do is good. But leave it to the director to decide which is your best performance"; Lasking their students questions and challenging them to ask questions constantly. For example, a teacher should signal that he or she wants to learn from students by saying, "I'm insecure about some issues, so help me by questioning me".

Students should be encouraged to say, "That's half-right, but from my experience, this might work too."; and LGetting students to specialise in a passion they have that either matches a growing sector or is unlikely to disappear. For example, the married father of two says his daughter's daughter, Ms Constance Grossman, took a year off before entering New York Film School to learn cooking at Ireland's famed Ballymaloe cooking school.

Now she has graduated, and she is specialising in crafting food shows on American TV.

But what do his countrymen think of his approach? He muses: "Intellectually, everyone agrees and it's a slam dunk with teachers who are 35 or younger.

But those who are 45 or older tend to question whether they want to relearn the pedagogy." As impassioned as he is about improving education, Lord Puttnam found formal schooling a bore because his teachers disregarded his interests.

He never went to university, but today has more than 40 honorary degrees. Two years ago, his left arm was smashed in a car accident and while recovering, his fashion designer wife Patricia suggested that he convert their garage into a video- conference suite.

Today, he has turned that suite into an online teaching business called Atticus Education and teaches the theory of film to students in Singapore, Australia, Britain and Canada.

What's the one thing he would like all students to remember? He says: "That their ability to adapt to and embrace the best aspects of change, and be resilient enough to deal with its negative aspects, determines how fulfilling their lives are."