Teamwork in 4 areas to fight rats pays off 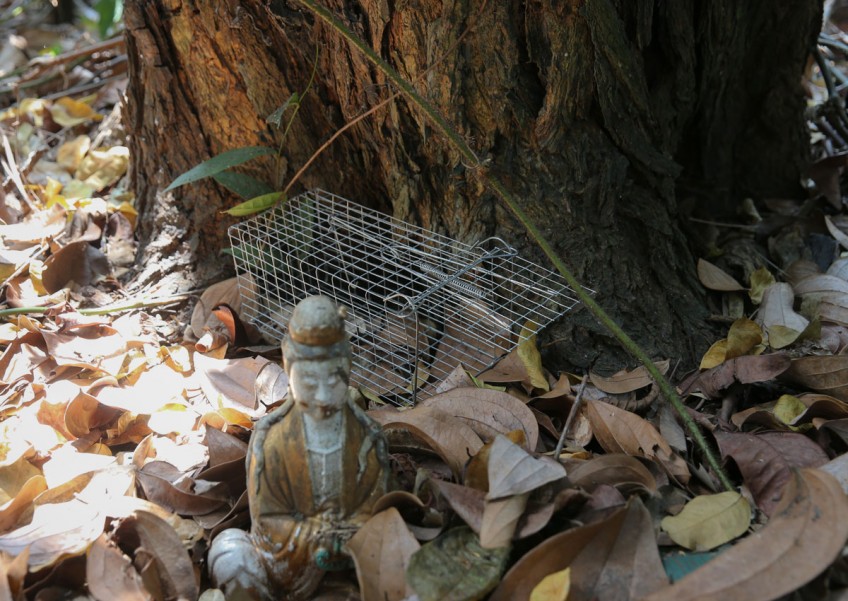 A trap for the rat seen in the forested area behind the temple.
The Straits Times

TO TACKLE the growing problem of rat infestation, a task force involving multiple stakeholders - such as town councils and food-shop and mall operators - is being piloted in four areas islandwide.

The four sites are Redhill Close, Bedok Central, Clementi Avenue 3 and Bangkit Road in Bukit Panjang, which were chosen because 40 to 130 burrows were detected in each area before coordinated efforts began, said the National Environment Agency (NEA).

In each area, the stakeholders engage pest-control operators and coordinate their rat-control plans to manage the overall situation.

Early results have showed a 15 to 70 per cent reduction in the number of burrows in each area, said NEA.

In recent years, the problem of rat infestation has worsened. About 43,000 burrows were found in public areas last year, up from about 42,000 in 2014, according to NEA figures.

Earlier this month, Senior Minister of State for the Environment and Water Resources Amy Khor said in Parliament that breaches involving rat infestation in areas run by town councils will lead to stricter enforcement.

In response to queries on how enforcement will be stepped up, NEA said town councils now face a $150 fine for a first-time offence for poor refuse management in their bin centres and central refuse chutes.

From July, an additional fine of $200 will be issued - under the Control of Vectors and Pesticides Act - if signs of rat infestations are found in bin centres, central refuse chutes and bin chutes, said NEA.

Depending on the severity of the problem, town councils may be ordered under the Act to carry out measures to deal with the rat infestation, on top of the fine, added the spokesman. They may face a fine not exceeding $20,000 if they fail to comply, said NEA.

While these penalties are not new, an NEA spokesman added that they would be more strictly enforced.

Town councils interviewed welcomed the stricter enforcement as it is a matter of public hygiene.

Chairman of Marine Parade town council Lim Biow Chuan, also MP for Mountbatten, said it will "work hard" to clear places under its management if there are rat infestations.

Zaqy Mohamad, chairman of Chua Chu Kang town council, welcomed the harsher enforcement but raised concerns over how rat nests may originate from areas not run by town councils.

Meanwhile, in Bangkit Road, a six-month pilot by the Holland-Bukit Panjang Town Council to tackle rat infestation has seen results.

A vegetable seller at Block 259 Bangkit Road, Low Mui Tong, said he used to catch "a lot of rats" half a year ago.

"But for the past few months, I haven't seen any," he added.