Teen shoplifter afraid of being teased for getting caught 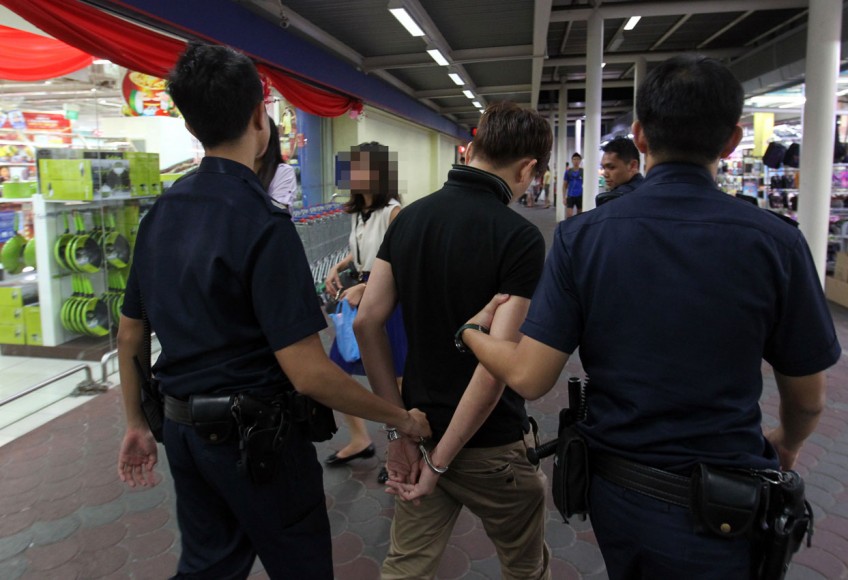 This 36-year-old man (centre), who was arrested for shop theft at the FairPrice supermarket at Block 805, Hougang Central on 7 January 2013.
Wanbao

In six months of shoplifting, he amassed a booty of products, such as tidbits and pens, as well as things he did not need.

One day, the teenager, who was then in his school uniform, was caught by a sharp-eyed security guard while trying to steal a set of headphones.

His reaction to being apprehended was not fear of what would happen to him for breaking the law.

Instead, he was overcome by extreme embarrassment.

He knew that his friends were going to tease him - not for being a thief, but for getting caught.

His friends were also shoplifters and he was the first among them to be nabbed.

Now 19 and studying in a polytechnic, Sam, who spoke to The New Paper on condition of anonymity, said that among shoplifters, a culture of peer pressure is pervasive and friends would egg each other on to do it, almost like a rite of manhood.

So they end up shoplifting just to show off to their peers and to feel the thrill of getting away with committing an offence.

When he was in Secondary Two, Sam started by stealing tidbits from a neighbourhood provision shop before progressing to pocketing pens and wallets from stationery shops.

"I got more motivated every time I succeeded," he told TNP.

"I just did it for fun and didn't even need most of the things I stole. Most of the time, I would give the stolen items to my friends."

But Sam would soon find out that there was a price to pay for breaking the law, with fear setting in after he was hauled to a police station for questioning.

"I was very, very scared because I was held in the police station for hours," he said.

As a youth offender of a minor offence, Sam was put on six months' probation.

He also had to attend a mandated guidance programme.

Those who complete the programme will be let off with a police caution instead of facing a charge.

Sam, who has two older siblings, said he felt he was lucky because getting caught was a major wake-up call.

His studies improved after his parents started making sure he went home straight after school.

His father works in construction and his mother in administration

His friends also stopped shoplifting after they saw what happened to him.

Sam still bears the burden of what he did.

When he applies for a part-time job, he has to mention his brush with the law in the application form.

He said: "I'll be honest and tell them that it happened when I was younger and that I've changed."

Sam, who now counsels at-risk teens at a youth centre, said: "I would tell them to consider how they would feel if someone stole from them.

"There is more to life than just taking stuff for free. Besides, it could affect your future."

Young shoplifters made front-page news recently after two Singaporean teenage girls were caught shoplifting Bangkok, and then made light of it.

In Singapore, theft from shops has been the top crime among those aged seven to 19 in the past three years.

If caught, young offenders, like Sam, have to go through a guidance programme instead of facing a charge.

But counsellors warned that petty theft should not be considered a "small crime" and should be nipped in the bud.

They cited peer pressure, parental neglect, and a cry for attention as possible reasons that youngsters shoplift.

Psychologist Frances Yeo, who practises at Thomson Medical Centre, said that when she previously worked with the Singapore Prison Service, she noticed that most offenders started with crimes such as stealing.

She added: "They will eventually end up with a long page of more serious offences, such as cheating."

Mr Daniel Ong, head of youth services at Care Corner Singapore, said that shoplifting among the young is a real concern.

He said: "Bad habits always start from small (actions). If the youngsters don't get caught, it could lead to a spiral of crime and the effects can be devastating."

Among other programmes, Care Corner has a Theft Intervention Programme and a specially tailored character and leadership programme called Youth Rangers, aimed at transforming the lives of at-risk young people.

Mr Ong said: "We will teach them values such as respect, integrity and compassion as well as building and developing leadership skills and traits.

"They will learn that every choice they make will have a consequence, whether good or bad, and (their crimes) could destroy their future."

Owner Tommy Tan said that he has seen an average of three to five shoplifters daily for the past five years.

Mr Tan, who sells mobile phone accessories, bags, and hair and beauty accessories, said he and his staff are constantly looking out for thieves.

He said: "They will keep looking at us - that's one giveaway. Usually, my staff will just warn the shoplifters and tell them to put the items back."

Mr Brandon Wong, 35, who runs a store selling bags, toys and stickers at *Scape, has seen more than five shoplifting cases in the past three years.

He said: "I think there is a culture where students are stealing things for fun. The youngsters will come in groups of two or three, and dare each other (to steal)."

After he installed closed-circuit TV (CCTV) cameras, he caught a few shoplifters red-handed, and handed them over to the police.

"It may be just a few dollars, but if we let them off, it will become a habit," Mr Wong added.

Singapore's retailers lost about $200 million to theft in 2010, according to the Global Retail Theft Barometer. More than half of it was from customer theft.

To compensate for the losses, consumers ended up paying higher prices - an average of $66.11 per person - said the study.

In conjunction with GSS this year, the Orchard Neighbourhood Police Centre launched a safe shopping campaign and retail watch group with the Singapore Retailers Association and Orchard Road Business Association.

It is not just retailers in the major shopping precincts like Orchard Road which are affected by shop theft.

Madam Phang, who is in her 50s and sells household items at a Pasir Ris neighbourhood shop, said that small items such as toys are usually favoured by young shoplifters.

"I will inform their parents if I know them, or call up their schools," she said.

"It's usually a small item, so I try to give them a chance instead of going to the police."

This article was first published on July 4, 2016.
Get The New Paper for more stories.