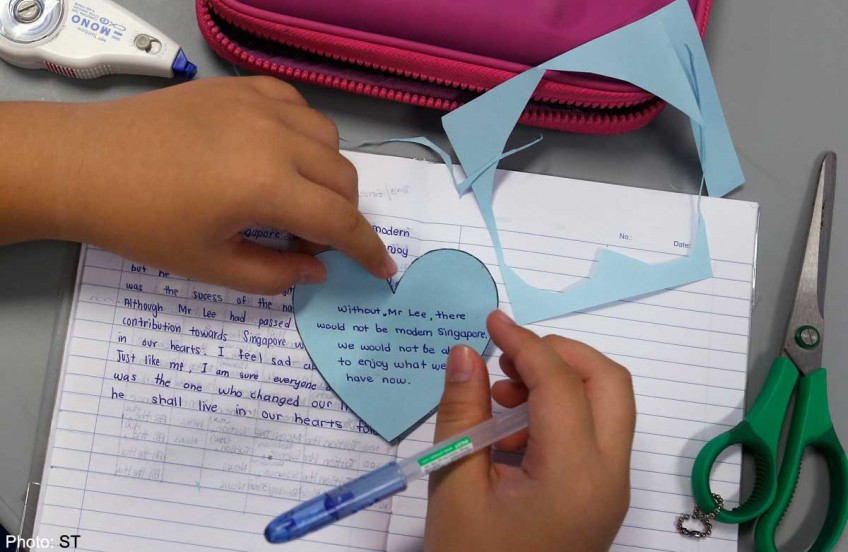 A man who kept his promises, played a key role in making Singapore clean and green and was a loving husband.

Some 1,300 pupils from Telok Kurau Primary, aged seven to 12, were taught about Mr Lee Kuan Yew's legacy during an hour-long slide show yesterday.

Teachers from the school - Mr Lee's alma mater - impressed upon pupils the influence of the former Prime Minister.

They recounted, for instance, how he delivered on his bold promises - such as in 1961, when a fire swept through Bukit Ho Swee and he promised distraught residents new flats to live in within nine months. Together with his team, he made it happen.

"He was a man of his word," said Madam Marliana Rashid, 32, national education coordinator at the school, who delivered the slide show on Mr Lee's life.

Pupils were also told how Mr Lee played a key role in all aspects of the country's development, from housing to economics to defence policies.

Principals at schools across the nation delivered speeches about Singapore's founding father at assemblies yesterday, drawing on a note Education Minister Heng Swee Keat had posted on Facebook.

Mrs Charis Wong, principal of Telok Kurau Primary, said: "People often say Lee Kuan Yew has four children. The fourth was Singapore and he was always speaking about her, thinking about her."

The pupils read out tributes to Mr Lee that they had written on heart-shaped cards. Others folded origami flowers, which will be gathered into bouquets and delivered to Parliament House when the school community pay their last respects there.

On Sunday, Primary Six pupil Lim Yu Li, 12, wanted to travel to Singapore General Hospital to place a card at the well-wishers' corner, but her uncle's car broke down en route. "I just want to thank Mr Lee - he did not give up on the dream of Singapore," she said.

At Raffles Institution, Mr Lee's other alma mater, the mood was sombre. "I am grateful to Mr Lee for emphasising meritocracy... so that we all have the chance to make a living for ourselves," RI student Rachel Koh, 17, said.

Mr Lee studied at RI from 1936 to 1940, but was never quite the model student, with his "mischievous, playful streak". As a student, he was always a late riser, "an owl, more than a lark", he wrote in his memoirs. When he was late for a third time in a term in 1938, then-headmaster D.W. McLeod gave him "three of the best with his trousers on", Mr Lee added.

Student Isaac Leong, 17, felt such anecdotes made Mr Lee, the politician and towering statesman, more relatable. "Still, it takes a special person to achieve what he did," he said.

At Crest Secondary, which specialises in the Normal (Technical) curriculum, 14-year-old Daniel Ismadir said: "He and his team cleaned up the Singapore River, Without him, we would not have the clean and green city that we do now."

Flags in all schools are flying at half-mast. Many also observed a minute of silence yesterday.