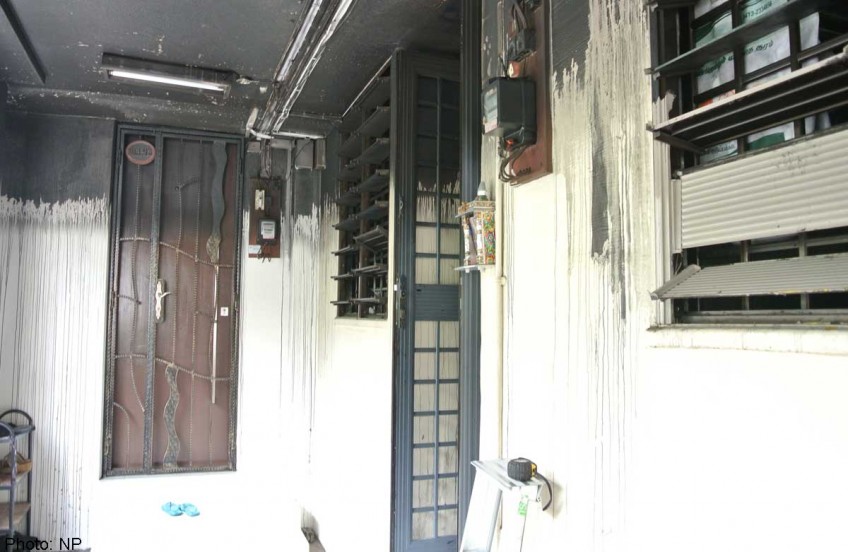 CHARRED: Fire broke out in a third-storey flat at Block 322, Hougang Avenue 5.

He was asleep in his flat, but the smell of smoke shook him from his slumber.

Angry flames were leaping up in his bedroom and he tried to put them out with buckets of water. When that failed, he rushed to his neighbour's flat for help, but the apartment could not be saved.

At about 10am yesterday, fire broke out in a third-storey flat at Block 322, Hougang Avenue 5.

The man, an Indian national, was a tenant at the flat and was sleeping alone at home when the fumes woke him up.

His neighbour, Madam Devi, said the man ran to her flat for help and she called the Singapore Civil Defence Force (SCDF) and let him take a seat in her flat as he caught his breath.

Although an SCDF ambulance arrived, he declined to be taken to the hospital.

Said Madam Devi: "He seemed to be shaken up by what had happened."

His wife was out working when the incident happened and she rushed back to the flat after receiving Madam Devi's call.

Madam Devi said: "Thank God, no one got hurt."

She said the couple and another Indian national had been renting the flat.

Madam Devi, who often works night shifts at Mustafa Centre, said she hardly sees them when she gets home, but knew she had to help them after hearing about the fire.

She said: "I have been renting this flat for a year now, so I want to help them as much as possible."

Madam Devi, who is married with a son in primary school, has offered her home to the couple until they find a place to stay.

The female owner of the flat went there to inspect the damage and left after confirming that the flat did not have fire insurance.

An SCDF spokesman said they sent two fire engines, a Red Rhino, one fire bike and two support vehicles. One water jet was used to extinguish the blaze.

No one was injured.