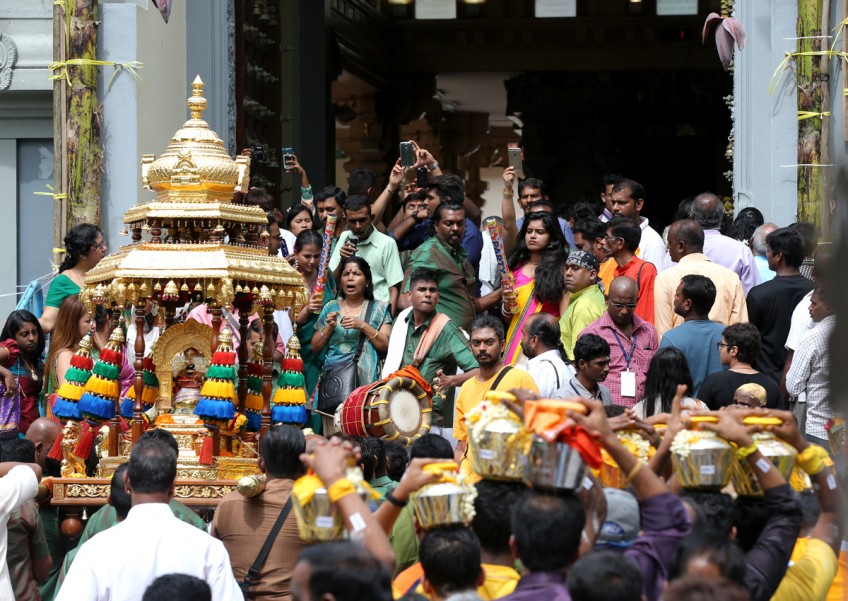 Justice Tay noted that musical instruments were played on temple grounds at the start and end of the procession.
The Straits Times

The High Court has dismissed a move by three Thaipusam participants to challenge the ban on the playing of musical instruments during the Hindu procession.

Justice Tay Yong Kwang made clear that, while the playing of instruments in the course of the procession is a religious practice protected by the Constitution, such a provision is restricted by public order concerns as provided in the same laws.

Messrs R. Vijaya Kumar, Balasubramaniam and M. Sathiamoorthy, who participated in the Thaipusam procession in February, had applied to court to lift the ban on the use of instruments - such as the urumi, a type of drum - and authorise their use at next year's event.

The application implicated the Government's 42-year-old policy forbidding the use of musical instruments during the foot procession, which in recent times had been modified as police authorised religious hymns to be sung throughout the procession and broadcast from public address systems at three locations, noted Justice Tay. Musical instruments were also played within the temple grounds at the start and end of the procession.

The applicants, represented by lawyer Eugene Thuraisingam, argued that their constitutional right to religious freedom had been breached by the police decision to restrict musical instruments for Thaipusam processions as this was a religious practice. He said "public order" must stem from "some real threat of violence or disturbance to public safety".

Senior Counsel David Chong for the Attorney-General disputed the claims, arguing that the applicants had no case for the relief sought, among other things. He said the application was premature as the Hindu Endowments Board had collated feedback on potential modifications for future processions, which was expected to be discussed with the Government soon.

He explained the restrictions were meant to address the risks for communal disturbance and stressed that the potential public order issues cannot be underestimated. He pointed to the crowd build-up and congestion, given that the procession lasted more than 24 hours on a 3km route and affected major roads.

Religious "foot processions" are fundamentally different from non-religious ones as religion is a sensitive issue in Singapore's multi-religious context, the Senior Counsel added. He noted that riots had arisen out of a religious foot procession in 1964.

Justice Tay accepted that the playing of instruments is an essential part of the procession, based on a Hindu expert's report and the applicants' submissions, but found it is not a universal practice. The judge also accepted that the trio had the legal standing to mount the court judicial review application.

But he found that the police had shown there were legitimate concerns based on their ground intelligence and were in a better position than the court to decide what was necessary for public order and safety. He found the police had taken a "calibrated approach", balancing applicants' rights against public order issues.

He also noted that Thaipusam had a religious dimension which attracted "public order considerations of a different degree and kind", compared to the non-religious theme of the Chingay Parade and the secular nature of the St Patrick's Day event, which the applicants had brought up.

"History and current events in Singapore and around the world give ample justification to the police to pay special attention to events involving a religious element," said Justice Tay.

The applicants are appealing to the apex court, while the Attorney-General is also cross-appealing on the decision that the applicants had the requisite standing to mount this application, and the judge's finding that, to some Hindus, the playing of musical instruments during the procession is part of Hindu practice.