Thank you, says PM Lee to well-wishers at SGH 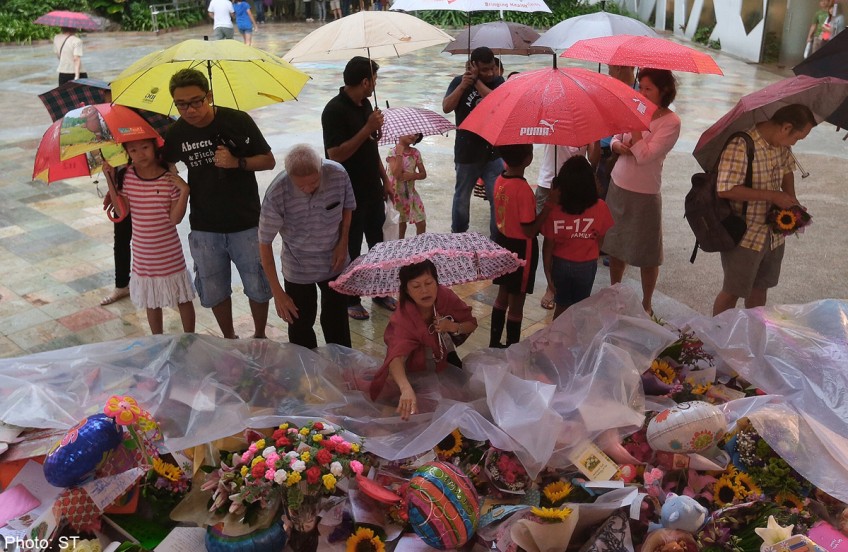 The younger Mr Lee dropped by an area at SGH, where hundreds of people have left flowers, handwritten cards and notes dedicated to his ailing father, who has been warded at the hospital with severe pneumonia since Feb 5.

He walked around thanking Singaporeans who had come by to show their affection for the older Mr Lee, whose health weakened further yesterday, according to a statement from the Prime Minister's Office.

He also obliged their requests for photographs and chatted with them before leaving with his wife, Ho Ching, to visit his father.

Among those whom the younger Mr Lee spoke to was student Lim Chee Kiang, who had brought a lava lamp, which he hoped would "shine" and brighten the get-well area at night.

"Prime Minister asked me where I stay and how I came here. I told him I took the bus and train," he told reporters later.

The area outside SGH's Block 7 has been piled high with hundreds of flower bouquets, handmade cards, artwork by children, boxes of paper cranes, balloons and soft toys.

SGH set aside the spot for people to leave their gifts, after some visitors had tried to leave them with hospital staff and around public areas of the hospital over the past few weeks.

In a Facebook update yesterday, Mr Lee said he was grateful to SGH for setting up the corner for messages for his father. "Glad I had a chance to meet and thank well-wishers for their support," he added.

Meanwhile, residents of Moulmein can leave their good wishes for Mr Lee Kuan Yew at Pek Kio Community Centre (CC), which has designated a corner for well-wishers.

More than 100 people have dropped by the Pek Kio CC to leave notes and gifts for Mr Lee since the area was set up on Saturday night, said a spokesman for the CC yesterday.

The well-wishers' corner at Pek Kio CC is open from 9am to 10pm. Visitors can sign and write messages for Mr Lee on a large banner hanging at the corner.