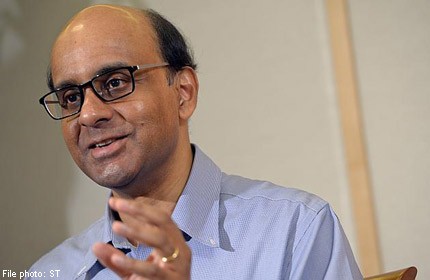 SINGAPORE - Deputy Prime Minister Tharman Shanmugaratnam has set out just how the Government plans to pay for and sustain a broader, stronger social safety net, and its reasons for moving in this direction.

"As we intervene boldly, we will ensure that our policies can be funded and sustained well into our children's future," he said.

He was speaking at an Academy of Medicine event just five days after a National Day Rally that Prime Minister Lee Hsien Loong said marked a strategic shift towards greater state support for the vulnerable in areas such as housing and health care.

DPM Tharman, who is also the Finance Minister, said Singapore is at a good starting point as compared to mature economies in the West. They built up large debts in their rapid growth years and when their populations were young, while Singapore did the opposite.

They will now have to take from their budgets each year - at least 2 per cent of gross domestic product (GDP) - to service national debts, while Singapore is able to get 2 per cent of GDP from the income on its national reserves for its social and economic priorities, he said.

To ensure that its policies for a fair society are good not just for two or three electoral terms but for generations ahead, Singapore will have to keep in mind five priorities, Mr Tharman said, elaborating on each in turn.

The first is to keep government subsidies targeted at those who most need them, rather than commit to benefits for all. Universal benefits are "wasteful and inequitable", and hard to take away once given, he said.

The second is to design redistribution policies in a way that spur self-reliance and individual responsibility. This is to avoid the erosion of the work ethic and personal effort that has led to high youth unemployment rates, even in Europe's successful economies.

"This is not about leaving things to self-reliance, or about leaving families to face uncertainties on their own," Mr Tharman said.

Rather, the Government's strategy is to support individuals as they strive to achieve their aspirations, to own a home by working and paying down a loan, and to save for retirement.

"This paradox of active government support for self-reliance has to run through all our social policies. It is how we help people to stand with pride and contribute to society," he said

The third is to make sure tax incentives and grants "aggressively" support and catalyse community and civic efforts, and strengthen "the values that drive us to be our brothers' keepers".

The fourth priority is to maintain and build on a progressive system of taxes and benefits to fund social spending.

Those in the bottom 10 per cent now receive benefits equal to 30 per cent of their lifetime incomes, he noted.

"We will preserve and build on this progressive system of taxes and subsidies in future, even when we eventually, in future terms of Government, find it necessary to raise revenues to support our growing health-care needs," he said.

Finally, Mr Tharman cited the intangibles that make up a fair and just society, saying this was not just about incomes but also people's opportunities to enjoy quality living in public spaces, to keep learning no matter how old they are, to forge fellowship in schools and be part of a workplace culture that treats all employees with respect.

There must also be space for people to pursue causes they believe will lead to a better society.

Ending on a spirited note, Mr Tharman said Singapore faces the challenges of its new phase, such as median income growth and social mobility, "from a position of strength, not despair".

"There is no assurance that we will succeed, but that makes it all the more necessary that we put all we can into succeeding."