There are consequences to bullying 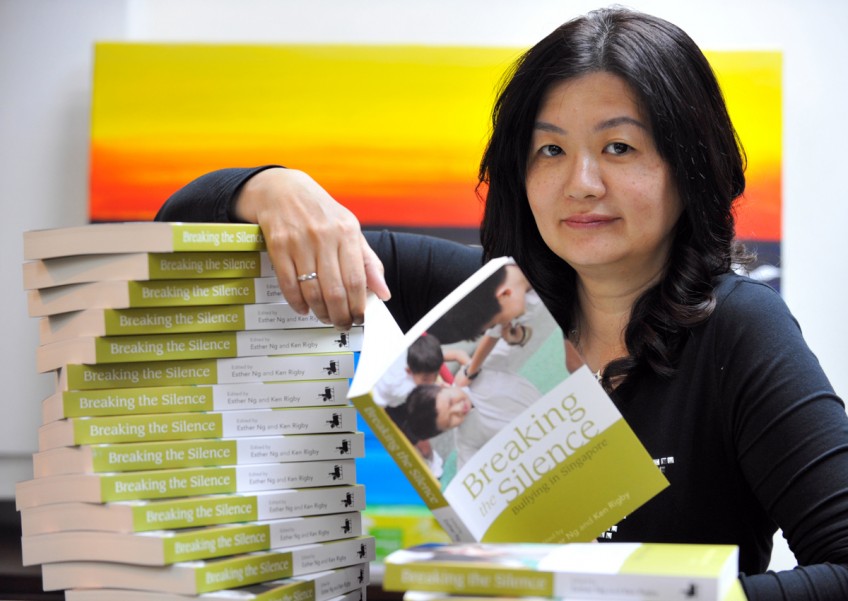 FIRM: Madam Esther Ng says counselling is not enough for the bully.
The Straits Times

Counselling is not enough for the bully in the video that has gone viral, said Madam Esther Ng.

The president and founder of anti-bullying organisation Coalition Against Bullying For Children And Youth (Cabcy) added that the bully should know there are consequences and a strong message must be sent to those who laughed and enabled the bully.

Madam Ng was one of several experts who asserted that the school needs to take firm action on all parties to send a clear message against bullying.

They were reacting to a 52-second viral video showing a boy at Shuqun Secondary School bullying two other students in class on Friday during a mathematics lesson. (See report above.)

Their classmates did nothing as they watched. One of them even laughed.

Another student is seen dancing on the table to loud music in the middle of the clip that has sparked outrage from many parents.

She told The New Paper: "As a parent, I feel furious and sad. I can feel the pain of the victim's parents." (See report on facing page.)

She said: "Counselling isn't enough. School bullying is not tolerated under the Protection from Harassment Act.

"Parents of both the perpetrators and the victim need to be aware that there are consequences."

With the law, victims can apply for a protection order against an offender, she added.

Dr Carol Balhetchet, senior director for youth services at the Singapore Children's Society, said: "The school will need to teach the bully that having fun and physically hurting someone are different."

Since alternative news site All Singapore Stuff posted the 52-second clip at about 9am, the post has been viewed more than 360,000 times and shared more than 10,000 times.

Online and offline, many took to forums such as hardwarezone and reddit while 47 people posted on the Ministry of Education (MOE) Facebook page calling for the ministry to take action.

When contacted, Mr Chia Hai Siang, principal of Shuqun Secondary School, said in an e-mail that the school has investigated the situation and is counselling the students involved. (See report on facing page.)

In an update at 9.30pm last night, the school told The Straits Times Online that an adjunct teacher was in the room at the time.

Adjunct teachers are former and retired teachers who work on flexible terms.

Onlookers are also culpable to the act of bullying and may have empowered the bully, said Madam Ng.

"It is of disturbing concern that nobody attempted to stop the abuse," she added.

"The audacity of (one boy) jumping on the table with loud music and (another) openly bullying the two boys, in what seemed like a delight, is in itself a disturbing portrayal of lack of empathy."

Mr Daniel Koh, 44, a psychologist at Insights Mind Centre, said: "The reason the bully may seem happy may be because he is doing something he enjoys and may not see the consequences of it.

"Friends should intervene. Schoolmates will provide a sense of care and concern."

Madam Ng said: "It seemed like his delight is in making the suffering of the victims much worse by smacking the book on the head further and further."

Although the video is short, it does not show that the assault stopped when the video ended.

Madam Ng was concerned for the victims.

She said: "As of now, there has been no information or understanding of how the victims are coping after the bullying episode and the circulation of the video that has gone viral.

"We hope the victims are sufficiently protected from further harassment and embarrassment as a result of this episode.

"Explicit explanation of how the school is handling the incident can help the public and other school students understand the consequence and impact that school bullying brings with it."

Although the experts wanted tougher action, they were divided on whether caning, a measure suggested by some netizens, was the best alternative.

Mr Koh said: "It reinforces that violence is the way to solve problems. It may spark a regressive cycle of violence and does not solve the long-term problem."

Madam Ng felt that the parents should reach out to the school for more details.

She said: "If parents of victims still have worries or concerns, they should speak with the school to seek assistance to make things right, such as apologies and additional restorative approaches to assure non recurrence of harassment or its like."

Some parents were shocked and even furious that the bullying seen in the video could happen in Singapore.

While some parents felt that the school should have taken a tougher stance than just counselling the boy, others said it was sufficient and hope that the bully does not repeat his mistakes.

Madam Nur Reyla, 48, who has five children aged 16 to 24, was infuriated. Her youngest daughter is currently studying in a secondary school.

"I felt very furious when I saw the video," said the lab technician.

"There are a lot of things happening in schools that are not being handled properly.

"As a parent, I feel furious and sad. I can feel the pain of the victim's parents."

Businessman Law Kum Seng, 54, said: "It's not acceptable. The boy needs to say sorry in front of the (school) assembly so the kids can heal their wounds.

"I've been bullied before, so I know that internally it takes years to heal.

"To see him hitting two boys made me angry. There's no benefit of the doubt."

Another parent, Mrs A. Rawat, 34, a freelance writer, said it was "a wonderful thing" that the video was recorded so that such situations are highlighted. The mother of five-year-old twin boys said she was shocked.

"I didn't know that secondary school students could be so brazen," said Mrs Rawat.

"The bully needs to understand that this is not the right behaviour and it can affect his life if he continues his ways. He could get into serious trouble with the law."

She is not surprised that the school had the bully counselled.

"It's a good idea. I hope it works and that the bully would never ever do this again," she said.

"If my child were a bully, I would sit him down, counsel him and let him face the music from his school.

"I would assess the situation. Perhaps there's an inside story I don't know about. After all, there's a saying that those who bully are also the bullied."

Mr Chia Gek Wee, 52, a purchaser and father of two teenage sons, felt that both the police and the Ministry of Education (MOE) should be involved in the investigations.

"Based on the bully's character, he should be sent to a boys' home to be disciplined and counselled," he said.

"The bullied boys also need to be counselled to build a stronger character."

Agreeing with the school's punishment, he said: "Everyone is entitled to a chance to turn over a new leaf. As long as it does not happen again, it's case closed.

"Otherwise, let the police handle this as an assault case."

A father of three children aged between 14 and 19, who wished to be known only as Mr Yeo, 48, said: "Suspension might be too good for him. Community service might be better."

The school has investigated and is counselling the students involved, said Shuqun Secondary School principal Chia Hai Siang when contacted via e-mail.

He said: "What might first begin as playfulness could potentially end up hurting others.

"The student involved has been counselled and he deeply regrets his actions.

"The school will continue to work with the students involved on observing appropriate boundaries and behaviour in the future.

"All parents of students involved have been informed of the actions taken by the school.

"The school takes all incidents of bullying seriously and has anti-bullying programmes to educate students and dedicated Character and Citizenship Education lessons to help students deal with such incidents."

The school did not respond to TNP's further queries but at around 9.30pm yesterday, The Straits Times Online reported that an adjunct teacher was in the classroom when the bullying occurred on Friday.

The school said it has since spoken to the teacher. The actual subject teacher was on childcare leave, reported ST.

When contacted, a Ministry of Education (MOE) spokesman said: "The school has investigated and is counselling the students involved.

"MOE takes a serious view of bullying in schools and does not condone such behaviour.

"Schools will investigate and follow up on all cases of ill-discipline and bullying, and will provide counselling and guidance to the students involved."

This article was first published on Sept 22, 2015.
Get The New Paper for more stories.