They came simply to say 'Thank you, Mr Lee' 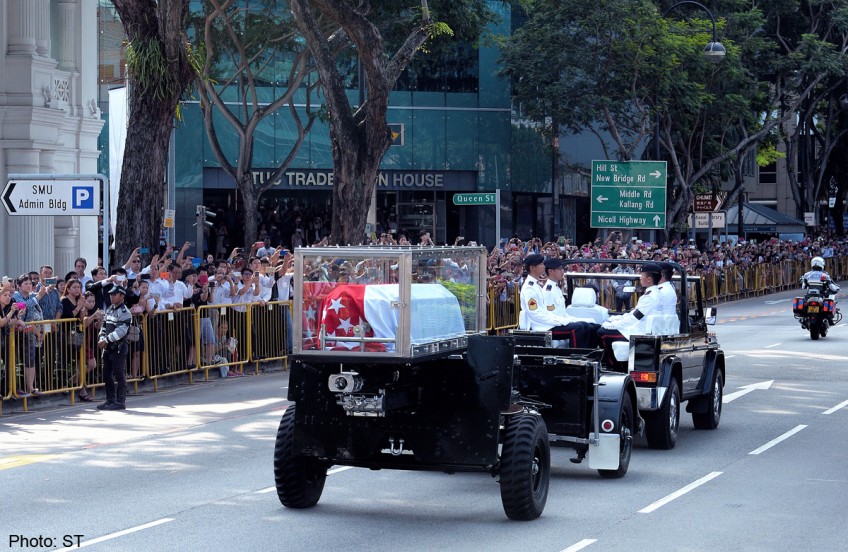 Borne on a gun carriage, Mr Lee Kuan Yew left the Istana for the last time, the crowd of mourners holding up smartphones and cameras in a digital salute as the cortege passes along Bras Basah Road.

This street has never known such silence.

This city of perpetual motion, but for a solemn breeze brushing the leaves, is strangely still.

This area in Orchard Road, outside the Istana, usually filled with the sound of hissing buses and a thousand conversations is now a mute gathering.

Even the phone, that Singapore accessory, does not dare to ring. Remembrance has its own appropriate hush.

Long before the gun carriage emerges from the Istana grounds at 9.37am, people are in anxious attendance. Businesswoman Angela Tan, 54, arrives in the darkness at 5.30am.

"I didn't get to see him come to the Istana," she says. "So I must see him leave it for the last time or I will regret this all my life."

Mr Fikri Omar, 63, has shrugged off tiredness after a night shift as a security guard to be here by 7.20am.

Under a blue sky speckled with clouds, mourning is in the air. Beneath a kind canopy of trees near the gate, where police officers gently marshal foot traffic, a solitary flag flutters behind a barricade.

It is a small flag on a stick, the type you might wave at a sporting event or at a parade. Yet, in keeping with the moment, even this one held up by a man in the crowd deliberately flies at half-mast.

When first light comes, the crowd between the Istana and Plaza Singapura is a trickle, then a stream, then a river of a thousand people.

Mr Lee Kuan Yew stood for all Singaporeans, now Singaporeans of all races and religions and types and dress come to stand for him.

Three sweaty runners arrive, a doctor in scrubs appears, women in wheelchairs make their way through.

A monk stops by as does part-time taxi driver Tajuddin Mohd Isa, 39, with his wife and young son in tow.

A group sings a song in praise, women carry flowers and others just hold on to a contained grief.

On one side of the Istana gate, under small white tents, are tables to write condolence messages.

On the ground, bouquets cover the earth, white lilies wrapped in plastic, yellow carnations in a bunch, all bringing colourful life to a sombre day.

Aleusheya Singh, nine, is here to leave her own scribbled message.

She is late for school but her father is a willing accomplice in this act: perhaps he appreciates this is a history lesson of its own.

A nation reserved in speech and reticent in expressing itself has made an exception these past few days for an exceptional man.

Emotion has been expressed widely, but more through quiet gratitude than gushy sentimentality.

On the numerous handwritten notes left here - for a man their writers may have never met but whose death they take personally - two words repeatedly stand out: "Thank you."

People want to write what they feel, they want to speak, as if words are their only form of respectful repayment.

A city proud of its present and fixated on its future is pausing to remember this man from its past and it is an admiration that is conveyed through every medium.

Mr Robert Lai Tien Kean, 46 and shy, articulates it on a typed note which he hands to reporters, part of which reads: "He was mighty in thought, courageous in decisiveness and swift in action immediately taken."

A child's unbiased opinion is revealed through a drawing of a crayoned figure, below which is scrawled the words: "Mr Lee You Are a Superhero."

But most people just mine their memories to talk freely of this man, a nation constructed and a self-esteem built.

Madam Rathika Ravindran, 45, remembers growing up in a kampung in the 1970s.

"It used to have just a public toilet out in the open. It was very scary, very smelly. But in no time at all, Singapore has developed so much. I believe we can thank him for that."

Madam Toh Bok Hua, closing in on 70, describes her childhood during the time of Mr Lim Yew Hock, Singapore's second chief minister, when she helped her family sell kueh by the roadside.

"I used to sit on a milk crate - we were illegal hawkers and the policemen would come and we would run."

Sometimes, she says, the kueh was kicked into the drain. "They weren't very compassionate then. But then Mr Lee Kuan Yew came along and things changed, and we got a stall to sell kueh."

Then suddenly it is time and the motorcycle engines of the outriders, waiting outside, start to hum.

First a police car appears, then the stately gun carriage carrying the flag-draped coffin, and the hush cannot be held any more. For a brief while, grief breaks its chains as if silence is both inappropriate now and unbearable.

The eruption of noise is spontaneous and diverse. A few clap and then the applause rises.

A chant of "MM Lee, we love you!" begins, because to some he is still Minister Mentor, and a few join in.

From across the street comes the yell "Majulah Singapura!", from behind comes the cry "Grandfather of Singapore". One man says nothing at all: he only bows.

As the gun carriage travels from the shade of the Istana into the sun of the street, citizens offer a digital salute: arms raised with smartphones in hand, filming every second, photographing every movement.

Yet through the clicking symphony of cameras can be heard the convulsive sounds of stifled sobs.

A tear trails down a woman's cheek and old men wipe their tear-stained spectacles. A photographer simply weeps and works.

Only the soldiers in the following trucks, young men on duty, rigid in their seats, disguise any loss with stoicism. A once-silent street is now just a sad one.

Some have waited for hours but, in just over a minute, the funeral cortege has passed.

It winds its dignified way to Parliament House where cries of "Lee Kuan Yew!" will rent the air. Here, outside the Istana, buses reclaim the street and noise returns to the morning.

Their leader has gone and people begin to disperse. Many of them presumably returning to work.

Just as Mr Lee would have liked it.