They get paid to have a ball 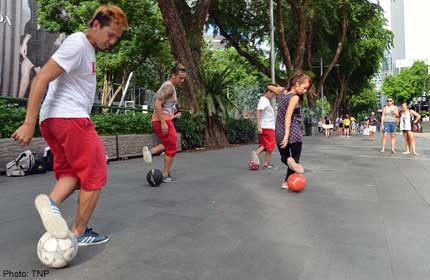 SINGAPORE - If you think Ronaldo has tricks, then you haven't seen Mr Terry Lee, 27.

Hopping on one foot, he can keep a ball in the air for several minutes using only the other foot.

Mr Lee is part of a group of freestyle footballers known as the Urban Street Team, that busks outside Ngee Ann City on weekends.

His group has six members. Three, including Mr Lee, are professional freestyle footballers, and the rest are students.

"But busking gives us a chance to try out new and different moves, which we can later incorporate into our paid performances."

Said Indonesian tourist Yong Ky, 40: "They are very entertaining and have a lot of coordination.

"I didn't know youth in Singapore had the time to practise so much."

Freestyle football has its origins in workouts by professional footballers. They often practise juggling the ball to improve their technique and control.

The group started in May 2009 with three members - Mr Terence Ong, Mr Mohammad Azri Majilan, both 28, and Mr Lee.

All three were aspiring footballers in the Prime League, which is the reserve team league of the S-League.

But their ambitions were curtailed by injury.

Each had stumbled on freestyle footballing and developed an interest in it.

Mr Lee, for instance, had chanced upon an online video of David Beckham and Roberto Carlos doing tricks with a football.

He said: "I also saw Diego Maradona doing tricks, and was amazed at all the different things you can do with a football."

It costs $1,500 to hire the whole group for a 30-minute performance. They have performed more than 500 times in the last four years.

They have also won their fair share of accolades.

The team trains together six times a week, for two hours each time.

Said another one of the members, Ms Valerie Su, 21: "During training, we share tips on how to do the tricks. "It's a bit like dance, we correct and learn from each other."

The three founding members even acted in the 2010 play Football! Football!, which explores football through dance, theatre, video and music.

Says Mr Lee: "Every boy dreams of being a professional football player.

"Not everyone can realise this dream. But I'm happy that I can still eat, drink and sleep football."