They had sex the first time they met 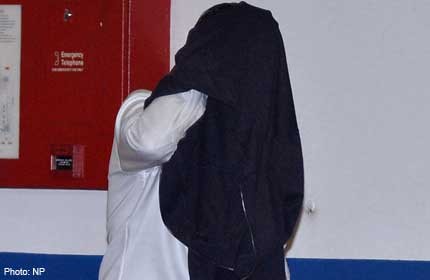 SINGAPORE - They had been in a "relationship" for nearly a year, but had never met.

The 20-year-old man and his 16-year-old girlfriend did, however, call each other daily and even exchanged text messages every hour.

When they finally met on one torrid afternoon in July 2010, lust got the better of them. They had sex in the boyfriend's car twice.

But they will remember that day, July 16, for a different reason.

The girl, then in Secondary 4, was allegedly raped by Sivakumar Selvarajah, who posed as a police officer, soon after the tryst.

Her former boyfriend, who is now 23, told the court on Wednesday that they met online in 2009, but never got the chance to meet initially.

The boyfriend cannot be named as there is a gag order protecting the girl's identity.

Then a final-year student at Ngee Ann Polytechnic, he had driven the family car that day and fetched the girl from her school in Tampines at about 2.30pm.

After he parked the car in a multi-storey carpark, they started chatting and making out on the front seats.

"I took the sunscreen from the car boot and blocked the back windshield so people can't see us," he said.

They continued kissing, but "being conservative", he took out another sunscreen to cover the windscreen in front too.

Still dressed in her school uniform, the girl went on to perform oral sex on him.

As space was tight in the front, they moved to the back seat of the car, where she performed oral sex on him again before they had sex.

While having sex, the boyfriend saw a white Mazda sport utility vehicle (SUV) drive past, going around the carpark before parking a few lots away.

Afraid of getting caught, he put on his clothes and went out to take a look.

There, he saw Sivakumar sitting in the SUV looking at his phone.

Not thinking too much of it, the boyfriend went back to his car where they had sex again.

This time, he thought he saw someone watching them, but could not see clearly either.

By the time they were done about 20 minutes later, it was almost 4pm and the girl said she had to get home before it was too late.

The boyfriend threw the soiled tissues and used condoms onto the carpark floor.

As they were hugging and kissing to say goodbye, they got aroused again, and she performed oral sex on him again in the car.

Sivakumar then knocked on their car window, allegedly telling them that he was "from the authorities" and asked to see their identity cards.

He said he was doing random checks and had caught some teens for taking drugs in the carpark.

Sivakumar also told them that he had "vans with warrant officers" waiting downstairs and was going to charge the boyfriend for littering.

Recounted the boyfriend: "First, I panicked. Then I was afraid. I was just rooted there. I was just really shocked.

"I had a feeling he was from CNB or CID, but not sure which one."

? Allow him to send the girl home without her boyfriend, or

? They both follow him to a police station where he would charge them for littering and having sex in public.

Afraid of her parents finding out, the girl went with the older man and was allegedly raped in his car somewhere in Tampines.

Her former boyfriend said he let her go because he was afraid the "policeman" would tell the girl's parents about their tryst.

He also told the court that he had an uneasy feeling about Sivakumar after he drove out of the carpark to go home.

Repeated calls to the girl also went answered for the next hour. By the time he got through to her an hour later, she sounded sad and gloomy.

She told him she had been raped and broke down over the phone. The police were soon notified. The man and the girl have not been in contact since the incident three years go.

"I received a text message from her sister telling me to give her time," he said in court.