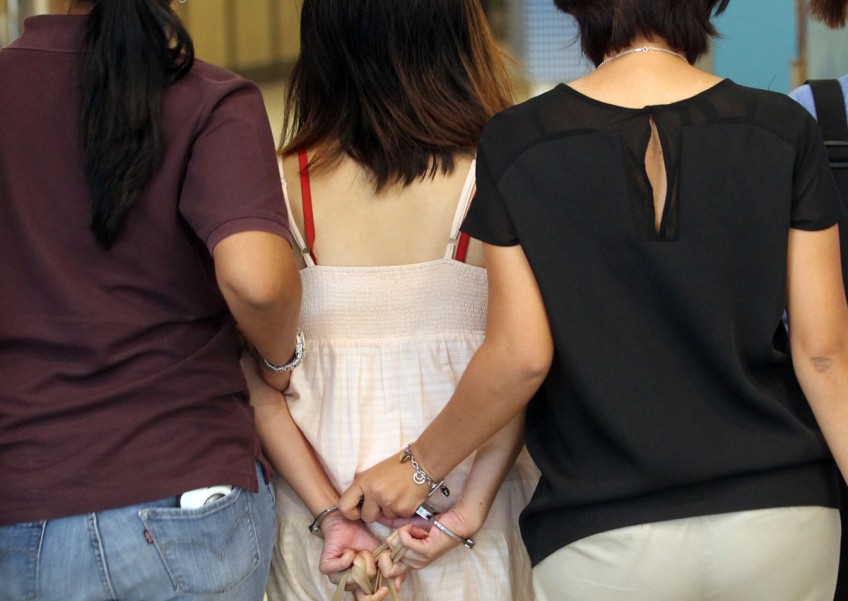 Businesswoman Zoe Heng watched with relief as her former employee was taken away by plainclothes police officers on Monday.

Her former shop assistant, Ms Liu Meiqi, 33, had allegedly stolen cash and clothes worth $15,000 from her shop in The Central shopping mall at Clarke Quay.

After she fired Ms Liu in August, Ms Heng had to deal with several people looking for her at the store and claiming that she owed them money.

Ms Heng, 43, who owns clothes shop Bless, told The New Paper yesterday that the police had contacted her to arrange a meeting at her shop with Ms Liu. They arrested Ms Liu shortly after she arrived.

Chinese daily Lianhe Wanbao reported yesterday that the police took Ms Liu away in handcuffs on Monday. They later took her to her terrace house in Dorset Road to gather evidence.

The arrest closes an unusual chapter in Ms Heng's life. Her patience and goodwill had been tested over the past nine months as she gave Ms Liu numerous chances to turn over a new leaf.

Ms Liu was hired as a part-timer in February and confessed to Ms Heng a few weeks later that she had a criminal record.

Ms Heng said: "I knew about her past but I was really soft-hearted and thought that everyone deserves a second chance.

"She told me her sob story and said that I was the only one who would be willing to help her."

In March, Ms Liu was sentenced to 50 days' jail after she could not pay the fines for 10 counts of evading taxi fares.

After she was released early for good behaviour in mid-April, Ms Liu smooth-talked Ms Heng into hiring her again.

Ms Heng recalled: "She came to my shop right after she was released, looking frail. She told me that she would change and asked me for another chance."

On a gut feeling, Ms Heng took precautions and installed a closed-circuit television camera in her shop.

"Many people warned me not to hire her again but I thought it would be fine since I had the CCTV," she said.

In June, Ms Heng noticed that sales were poor and checked the CCTV footage. She was upset to find that Ms Liu had been stealing cash and clothes from the shop.

Ms Heng said: "Although the shop accepted Nets and credit cards, Ms Liu would tell customers that the machines were not working and ask for cash.

"I also noticed that she would leave the shop wearing new outfits and returned without them."

But Ms Heng still felt compassionate enough to not want to sack her.

When she confronted Ms Liu, she promised to return the money and pay for the clothes, telling her boss to take a cut from her salary.

Ms Heng said: "She sent me messages, apologising and saying that she didn't want to go back to jail. I guess I felt sorry for her."

She finally made a police report on Oct 3 after realising that many others could have been cheated by Ms Liu.

Ms Heng said: "People would come to my shop, saying that Ms Liu owed them money, usually about $50.

"She has been making use of the kindness of so many people. I cannot give her another chance."

Police confirmed that they are investigating.

Beautician Kenneth Lee, 30, was busy with a client when Ms Liu Meiqi walked into his shop at Clarke Quay Central shopping mall in late August.

She asked about a facial package and left the shop after making an appointment to come back the next day.

Mr Lee told The New Paper: "She told me that she had lost her ATM card and needed to borrow $50 from me.

"She looked so sincere and said she needed the money to pay for food that she had bought for her children at a stall downstairs."

Ms Liu promised to pay back the money when she returned the next day. She also pointed to a clothes shop at the mall - visible from Mr Lee's shop - saying that she worked there.

Mr Lee said: "I was so busy that I didn't think too much about it and just passed her the money. Obviously, she didn't return the next day.

"When I asked the boss of the clothes shop a few days later, I found out that I was not the first one to have been cheated."

Her ruse was often the same - she would try to pay with her credit card but the transactions would fail.

Ms Liu then told the cabby that she didn't have cash and asked for their bank account number, promising to transfer the money for the fare.

She also gave them her identity card details and contact number but later ignored their calls.

Since she could not pay the fine, she went to jail but was let out early for good behaviour.

She had a similar conviction in 2013 when she was fined $2,400 for failing to pay four taxi drivers.