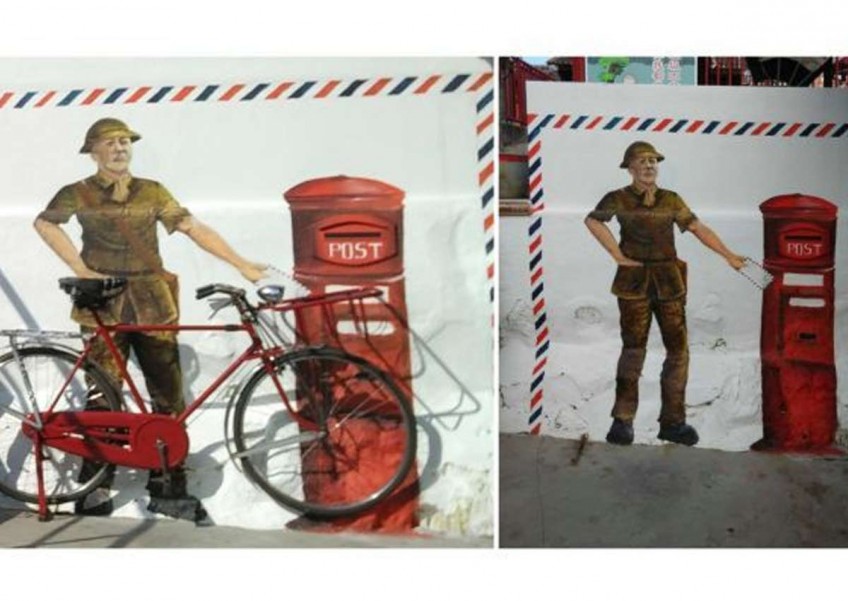 The antique bicycle (right) is missing from the mural since Sunday morning.
The Star/Asia News Network

GEORGE TOWN: An antique bicycle welded to the mural of a postman in front of Snake Temple has been stolen.

Snake Temple resident committee chairman Sim Siang Chuan said he was surprised to see the bicycle missing when he came to the temple at about 7am on Sunday.

He believed the incident could have taken place in the early morning when the culprits cut the iron grilles shackled to the bicycle.

"I never thought this could happen at a temple. The bicycle worth about RM1,000 is full of historical value as it was made in 1967.

"We hope it will be returned to the temple. We won't take any action as long as it is given back," he said, adding that he was hopeful of getting it back.

Sim has since lodged a police report over the matter.

The mural was one of the two put up by the temple early this year as an attraction for tourists to pose for photographs.

The other mural features an old house with a real trishaw specially bought from Malacca.

Sim said this was not the first time things had been stolen from the temple, adding that a water faucet and chairs within the temple had also gone missing.

"All these items went missing at night time when it was quiet and nobody was around."

He said the temple management would consider getting a new bicycle to be fixed on the mural.

"We will put on extra iron grilles to make it difficult for the thieves."