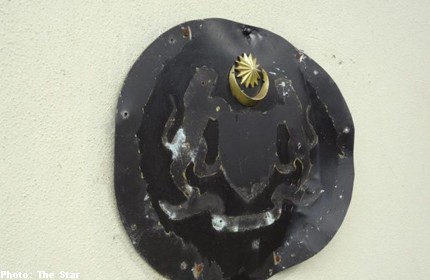 KUALA LUMPUR - Thieves made off with a few royal coat of arms from the old Istana Negara, again.

These metallic objects, each measuring at 59cm by 64cm, were installed all along the perimeter wall of the old palace, now the Royal Museum, in Jalan Istana here.

In May last year, 11 of these crests were stolen.

Recently, the KL & Selangor Chinese Assembly Hall discovered that five of these crests - installed on the wall near the Kuen Cheng High School - were damaged with their most valuable parts, painted in gold, missing.

On Saturday, the chief executive officer of the assembly hall, Tang Ah Chai, posted pictures of the damaged crests on Facebook and wrote: "From this incident that even the national crests were pried off, looks like the people cannot take crimes lightly."

After the palace was moved to a new building in Jalan Duta two years ago, this place was converted into a museum, and is protected as a cultural asset.

According to the National Heritage Act, those found guilty of stealing or damaging national heritage items can be jailed for not less than five years and fined not more than RM50,000, or both, upon conviction.