Thieves in Malaysia caught on camera, then by police 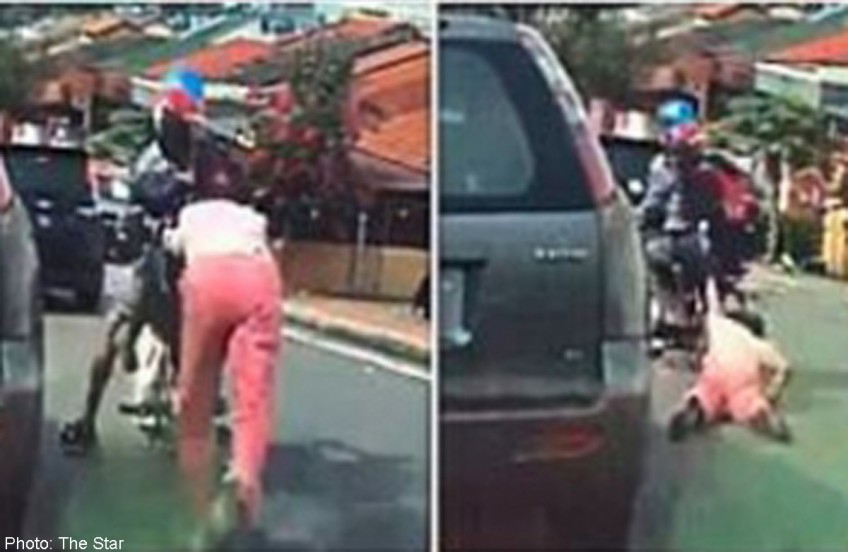 PETALING JAYA - Malaysians were outraged at two snatch thieves who dragged an elderly woman along on their motorcycle with their loot - her handbag.

A video clip of the crime, exposing the motorcycle's licence plate number, went viral on the Internet and helped police arrest the two men a few hours after the incident.

The video, which was recorded on a car dashboard camera and posted on Facebook, saw numerous people calling for swift retribution for the two men. Many expressed their sympathies for Seow.

"I wish for those two to receive the max sentence that the law has stipulated," commented Eone Iwan.

Another user, Encik Hirman, said the two men should be dragged on the streets to give them a taste of their own medicine.

"This is too much. Pity the old aunty," commented Francis Fue.

Another user, Lau Sook Meng said she was glad Seow was not seriously injured.

"Well done to the police, hope the department will continue to be vigilant and proactive," commented Fong Chew Khew.

Another Facebook user, Kimberry Lee also praised the police and said credit should be given to the police where it's due.

The video, which went viral on Facebook, showed Seow waiting to cross a road.

The two men on a motorcycle then snatched her handbag, but she held on tightly to it and was dragged along the road as a result.

Petaling Jaya OCPD Asst Comm Azmi Abu Kassim said the crime happened on Jalan 20/16A here around 10.20am on Wednesday.

A witness later lodged a police report with the motorcycle licence plate number captured in the video.

The information provided led police to arrest the two suspects, aged 21 and 24.