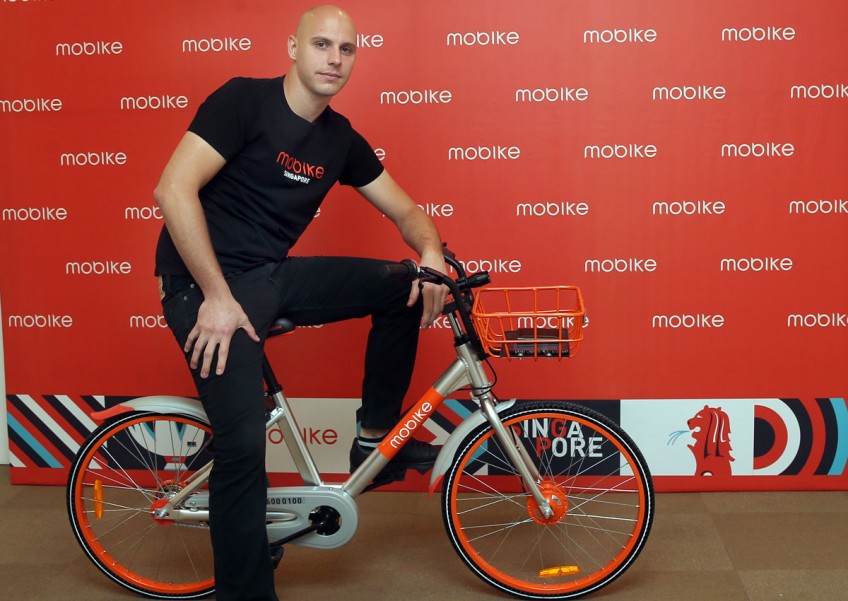 There are now three bike-sharing apps in Singapore, after the official launch of Mobike yesterday.

Like ofo, another Chinese-owned bike-sharing app, and oBike, a Singapore venture, Mobike uses a dockless bike-share system and users can unlock its bicycles by scanning a QR code on it.

Users pay $1 for every 30 minutes of use, and each bicycle comes with a proprietary "smart lock" containing GPS technology, which allows the company to locate and track the position of each bicycle.

When a rider reaches his destination, he simply has to park the bike and secure the smart lock.

Questions have come up over where such bicycles can be parked, though.

The East Coast-Fengshan Town Council said that public racks around the Bedok Town Centre are not to be used for "rental business", The Straits Times reported on Saturday.

It placed removal notices on bike-share bicycles parked at racks around the town centre and asked oBike to remove its bicycles from the racks. (See report below.)

In a bid to overcome this parking issue, Mobike said it plans to work closely with a number of partners to identify "Mobike Preferred Locations" to leave and pick up its bicycles, targeting areas of high convenience around the city and existing authorised bicycle parking zones.

A spokesman for Mobike said: "After each ride, the bikes should be left in any approved bike parking area, such as those around MRT stations and HDB void decks."

He told The New Paper: "Bike parking locations should typically be at areas of activity, such as MRT stations, bus interchanges, bus stops, shopping centres and hawker centres."

If a user cannot find a preferred location to leave his bike, Mobike's policy states that the rider can leave the bicycle "at any public accessible location that does not obstruct the traffic flow of pedestrians or vehicles".

Mobike said yesterday more details of its operations will be revealed in the coming days.

Mr Elgin Ee, general manager of oBike, said yesterday that they hope to reach a compromise with the East Coast-Fengshan Town Council over parking.

The town council placed removal notices on the company's bicycles which were left in parking racks around Bedok Town Centre.

It also contacted oBike and informed the bike-sharing company to remove the bicycles as the racks are not to be used for rental services.

Speaking to The New Paper yesterday, Mr Ee said that other town councils were supportive, adding: "Our riders are residents, too.

"We understand if the town council is concerned about overcrowding, but we hope they understand that we're serving the residents."

He said that oBike is now exploring other areas where users can leave their bicycles.

National University of Singapore transport researcher Lee Der Horng told TNP that it will be difficult for commercial operators if they are not allowed to use public bicycle parking racks.

He said: "I don't think it will be a healthy development.

"Both parties should try to work out a solution and hopefully have a more open mind.

"Those bikes are being used by residents - who are using them for all sorts of purposes, such as travelling within the community.

"If the town council says no, residents will lose the opportunity to enjoy the service."