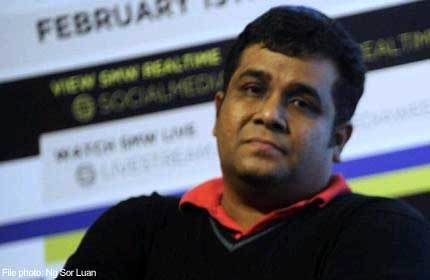 SINGAPORE - When a blogger's posting makes for Parliamentary debate, the signal is clear, said experts.

Bloggers now shape opinions. But do they do it responsibly?

Do they think they are doing enough?

That depends on the medium.

Mr Philemon said he exercises more care with his blog than with postings on his Facebook page, one of which earned him a mention in Parliament on July 8.

As thick haze enveloped Singapore, he re-posted a friend's comment that the public was denied access to the nine-million stockpile of N95 masks.

"They are exercising greater reach. It's a sign that their influence is growing," said the academic director of executive development at Singapore Management University.

"I'm a blogger, not a news source," said Mr Philemon likening the extent of his influence - both online and offline - to "a pimple on your face that is obvious to you but unnoticed to others".

Asked whether that Parliamentary mention meant bloggers' influence is increasingly being recognised, he said: "When people are talking about you online, it may seem like the whole world is talking about you but very often, that's exaggerated."

"There's a big difference between what journalists write and what bloggers put out.

"Although both journalists and bloggers do try to verify and fact check before they publish anything, the fact that most bloggers are amateurs cannot be ignored," he added.

Yes, that part can be tough for bloggers, in part because of the lack of professional training, said Professor Ang Peng Hwa, director at Singapore Internet Research Centre, and Dr Netzley.

But both said bloggers must then exercise judgment and think critically about the information that they receive before putting up a post.

Otherwise, they risk losing credibility. And the experience of getting it wrong can be harsh.

Blogger Alex Au and former TOC chief editor Andrew Loh found out first-hand, having had to apologise or back track recently.

If it is unable to do so, he called on the website to remove the post and apologise for having published false information.

He was served a letter from Mr Lee Hsien Yang's lawyers about a defamatory comment on the website in February last year. TR Emeritus took down the comment and posted a statement of regret.

To get it right, Mr Wan said he would write in to the authorities for confirmation.

The mainstream media reported on the police apologising for not handling the case better, an example of how "the online media can help to surface problems for people's attention", Mr Wan added.

He would also carry a clarification if an earlier post was found to contain inaccurate information, something that Mr Philemon said he does as well.

"The Internet is just a conduit," Mr Wan said.

"As long as you keep that channel open, even if the information turns out to be false, there will be other netizens coming forward to clarify that false information. And we welcome that."

And because he wanted to get it right, Mr Wan decided to make known his identity, to "give the site a more respectable platform so when we write in, the authorities will be more willing to engage us".

Such a "coming out" has worked.

Mr Kwan, who blogged about Pulau Ubin residents' purported eviction has a similar checking process. He started blogging in 2008.

He told TNP: "I decided to do some verification before publishing my post about the supposed eviction of villagers on Pulau Ubin. "I also ensured there was proof that more than one copy of the letter existed, thus making it less likely that it was a hoax."

Referring to the N95 masks Facebook posting, Mr Philemon later said in a press statement that he had posted the comment to get more information on the topic, as "the Government assurances did not tally with the situation on the ground".

But for Mr Wan, it's not just bloggers' ethics that keeps him up at night.

He said: "If you post things that are inaccurate, people will not believe your site and the credibility goes down. I also don't want to get onto the wrong side of the law."

So will there be higher standards for bloggers now, whether they want it or not, after the episode in Parliament?

And as people become increasingly wired, the search for credible information is also becoming more important.

Former Nominated MP Calvin Cheng's letter in The Straits Times on Tuesday warned about the danger of people relying on information that bloggers put out, as they have neither the expertise nor the data to give advice.

And government agencies seem to be clued in to ensuring accuracy directly with the bloggers.

Mr Wan said more government agencies are responding to his enquiries since he identified himself as one of the TR Emeritus editors.

Quite a change from before, when the Government largely ignored online chatter.

But netizens do play a role, said Prof Ang.

He cited the recent incident in which netizens ticked off Mr Andrew Loh for his expletive-filled Facebook tirade against President Tony Tan.

"If we adopt the perspective of common practice becoming common law, the bloggers' actions are already a (way) of drawing up a code of conduct," he said.

But it is a slow process.

"At this rate, it would take us 10 years to draw up the Ten Commandments for bloggers," Prof Ang quipped.

And meanwhile, when a posting causes enough concern, it can end up being discussed in Parliament.

Of his mention by the Minister, Mr Philemon said: "There was no necessity for (the Minister) to refer to an individual citizen in reply to the Parliamentary questions, especially when I had no chance to defend myself on such a platform."

He added: "It was unnecessary and sets a very bad precedent - now any citizen who raises a question can be labelled a rumour-monger and be discussed in Parliament.

"I'm very disappointed by that."

One of the co-founders of political website The Online Citizen.

Quit in June 2011 and set up the socio-political website publichouse.sg with several friends. Publichouse.sg has around 4,000 "likes".

Last month, Mr Loh posted an expletive-filled tirade against President Tony Tan Keng Yam on Facebook, criticising the president for a perceived lack of action during the haze.

Following criticism, he apologised and said he would write a letter to the president.

The president has not made any public comments on the case.

Best known as a gay activist, Alex Au Waipang founded the socio-political website Yawning Bread in 1996. Its Facebook page has around 1,700 "likes".

In January this year, Prime Minister Lee Hsien Loong's lawyers asked Mr Au to take down a series of articles deemed defamatory to the PM and the People's Action Party.

This was not Mr Au's first brush with the authorities.

Last July, he apologised to the courts for alleging that they were biased towards the well-connected in society after plastic surgeon Woffles Wu received a traffic fine.

Spuddings.net author Kirsten Han studied in New Zealand and Wales. She works as a journalist and film-maker, among other professions.

She misrepresented a late-night call from Law Minister K. Shanmugam to lawyer Remy Choo on her blog in late June.

Both men had spoken privately about a potentially libellous article in the Australian-based The Global Mail.

Following responses from Mr Shanmugam and Mr Choo, Ms Han was criticised by netizens. She later carried a clarification.

One of Singapore's most famous bloggers, Mr Brown (aka Lee Kin Mun), started the mrbrown.com website in 1997.

His column for the newspaper Today was shut down in 2006 after he wrote a satirical article titled: "S'poreans are fed, up with progress!"

1. Xiaxue: Blogs about anything, though the writer is known for her endorsements of beauty and home products. (Real name: Wendy Cheng)

2. Mr Brown: Blogs about Singaporean society in a satirical way, and also on his life, though he also delves in politics. (Real name Lee Kin Mun)

5. Ladyironchef: Blogs about food, travel and lifestyle in Singapore and around the world (Real name: Brad Lau)

6. Alvinology: Blogs about the life of its writer, covering all lifestyle topics from food to travel to movies (Real name: Alvin Lim)

7. PassportChop: Blogs about the travelling experiences of its two writers. (Real names: Zhiqiang and Tingyi)

9. Noob Cook: Blogs about making food, while also reviewing food around the island. (Only known as Wiffy Gal)