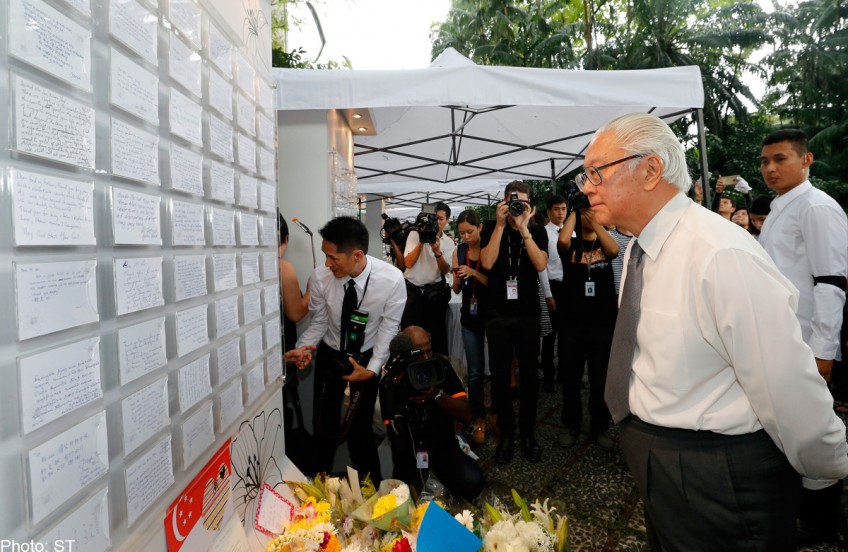 President Tony Tan Keng Yam reading messages left by Singaporeans from all walks of life as well as foreigners.

WHEN Madam Ramairthan Muthukrishnan's house and provision shop in Kampong Eunos had to make way for new Housing Board flats some 40 years ago, she and her husband were caught in the lurch.

They had married in a traditional Indian wedding ceremony and did not get an official marriage certificate. This meant that they could not apply for a new flat. Desperate, they sought help from former Prime Minister Lee Kuan Yew during a Meet-the-People Session.

"Mr Lee understood that it was embarrassing for us to apply with the Registry of Marriages because we were already married with children," the 73-year-old said. "He told us not to worry and wrote a letter for us, so we could apply for a four-room flat in Hougang."

Mr Lee also helped the family get financial aid to tide them over the period.

"I feel like I have lost a father," she said, with tears in her eyes.

She was among the thousands who continued to stream into community tribute centres yesterday to pay their respects to Mr Lee, who died on Monday morning. He was 91. Long queues formed at tribute sites such as those in Tanjong Pagar and Kovan, as residents waited in line to write condolence notes.

Madam Chen Xin Ying, 66, was one of those at Kovan Hub Tribute Centre. She fondly recalled her earliest meeting with Mr Lee in her family's kampung near Bukit Timah Hill. She visited the tribute centre with her husband and her granddaughter, who had just finished school that afternoon.

"I was about 10 years old then, and he was visiting all the kampung to get to know the situation in each and every one of them," said Madam Chen. "I remember that his way of speaking was very forceful and powerful."

She also remembered staying up late on the night of the 1955 elections to hear the results of the Tanjong Pagar seat that Mr Lee was contesting.

"My entire family leapt in excitement on hearing PAP had won the seat. It was just so important to us because it was Mr Lee Kuan Yew's victory," she said. Over at Tanjong Pagar, there were residents like Ms Daisy Yew, 51, who works in a hotel.

She was not always a fan of Mr Lee's leadership.

"In the past, I thought he was a dictator; I couldn't understand what he was doing," she said, referring to Mr Lee's resorting to detentions without trial under the Internal Security Act.

But she said a year of overseas travel in her late 20s opened her eyes.

"You see that the facilities in other countries are built for the elite and not the masses; you also realise just how safe it is here," she said. "And you know he made those tough decisions for the good of the people."