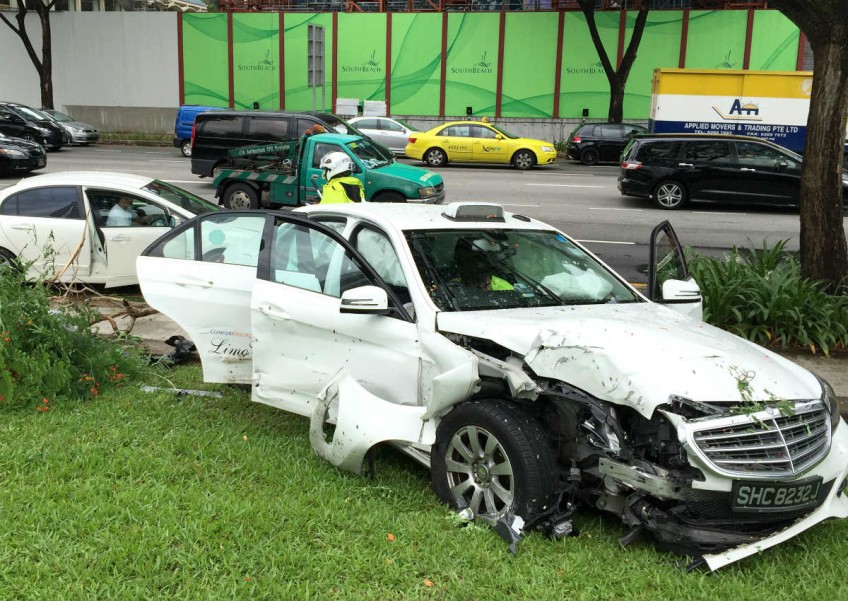 The taxi and the Honda Civic after the accident yesterday.
The New Paper

Three vehicles were involved in a collision at the junction of Bras Basah Road and Nicoll Highway yesterday at about 11.15am.

When The New Paper arrived at the scene, a white ComfortDelGro limousine cab was on the grass patch of the War Memorial Park.

The front of the taxi was badly damaged.

Just behind it was a white Honda Civic. Its bumper had fallen off due to the impact of the accident.

Nearby was a black BMW with damage to its front.

Lying next to the vehicles was a lamp post surrounded by shards of broken glass and twisted car parts.

A tow truck driver from Cogent Automotive Logistics, who wanted only to be known as Mr Phua, 60, was at the scene.

He said: "When I got here, all I could see were the cars. The drivers (of the Honda Civic and taxi) were gone."

A police spokesman told TNP that the 66-year-old taxi driver was found unconscious.

According to a Singapore Civil Defence Force spokesman, he was taken to Tan Tock Seng Hospital.

The driver of the BMW was still there when TNP arrived at the scene, but he declined to be interviewed.

This article was first published on July 9, 2016.
Get The New Paper for more stories.