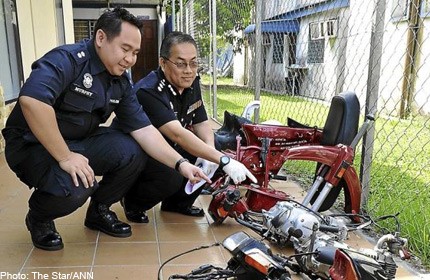 According to Ipoh OCPD Asst Comm Sum Chang Keong, police acted on a tip-off and ambushed the trio at a house in the village at about 1pm on Tuesday.

"During the ambush, we arrested two 16-year-olds and a 17-year-old.

"We are trying to determine the scope of the trio's activities and their modus operandi," he said during a press conference here yesterday.

On a separate case, ACP Sum said police had solved a car theft reported on Aug 8 with the arrest of two men on Tuesday.

"When the officers approached the men, they sped off but lost control of the car and crashed about 1.5km away.

"One of the men was arrested on the spot while another was caught an hour later at Taman Rishah," said ACP Sum, adding that police found two parang, a screwdriver, tape, masks, keys and a bag in the car.

The two men are now under remand.

The owner of the Honda Civic, construction worker Wong Loo Kheong, 48, was present to retrieve his vehicle and thanked the police for solving the case.