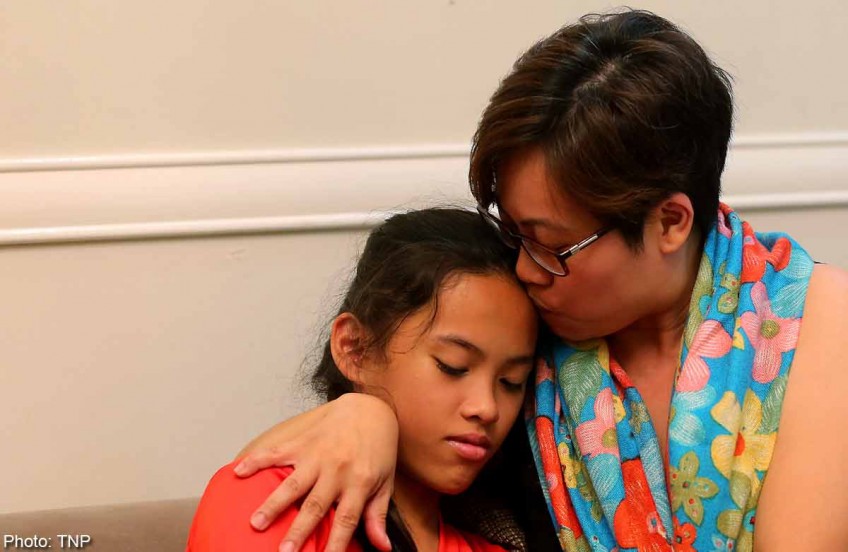 She spent the whole of Monday visiting the burial and wakes of her friends and teacher who died in the 6.0-magnitude earthquake that struck Sabah, Malaysia, on June 5.

"When I was there, I couldn't cry any more because we had cried too much," said Ashley.

She said that she was thinking: "Why must they die?"

Ashley and Sonia were best friends.

"I'll miss her voice, her laugh, her face and her presence," said Ashley.

She was also with Sonia, Rachel and Peony in the netball co-curricular activity in TKPS.

Over Tuesday and Wednesday, the Primary 6 girl hung out with her schoolmates who had survived the quake.

Said Ashley: "We don't actually talk about the Mount K thing, we talk about fun stuff."

But on Wednesday evening, Ashley, accompanied by her mother, spoke of the tragedy at Mount Kinabalu which killed 18 people. They included 10 Singaporeans, seven of whom were her schoolmates at TKPS and two teachers. One Singaporean guide was also killed. (See report above.)

She was climbing the mountain behind her teacher, Madam Nur Uzaimah Fadzali, when the quake struck at 7.15am.

She said: "Rocks were falling. I almost fell but luckily I grabbed on to my teacher's legs."

The rocks were half the size of a car tyre, she said.

"The rocks didn't really hit me. They hit my backpack," said Ashley.

Madam Uzaimah was leading the Group One climb with Ashley and her schoolmates El Wafeeq El Jauzy, Navdeep Singh Jaryal Raj Kumar and Sonia behind her.

Behind them were Singaporean guide Muhammad Daanish Amran and Sabah guide James Michael.

They were wearing helmets and climbing in a line, tethered to a safety rope attached to the mountain.

Madam Uzaimah was hit on the head and shoulder by rocks, said Ashley's mother, Madam Farhan.

The housewife said that Ashley's helmet, jacket and backpack, which was ripped off when the rocks fell, had protected her.

"Luckily, the pupils were wearing helmets on the mountain. The doctor said there was a bump on Ashley's head.

"Her right arm was also slightly injured (from the falling rocks). But there is no fracture and medical checks have given her the all-clear," said Madam Farhan.

Ashley said that she did not know what happened to the others in her line when the quake struck.

She said that Madam Uzaimah, who teaches Higher Malay in TKPS, took her to a shallow overhang. The tremors stopped soon after.

Madam Uzaimah, who was injured, then went out to look for help.

Ashley was then found by Mr Michael, the Sabah guide, who helped her make her way down the mountain.

On their way down, they found Wafeeq, who was injured and had difficulty walking. Together, Ashley and Mr Michael helped Wafeeq slowly, by foot, to a helipad at Laban Rata, a resthouse. As the three were walking down, Ashley saw her form teacher, Mr Mohamed Faizal Abdul Salam.

He was badly injured, having suffered head and shoulder injuries from the falling rocks.

Despite this, he was helping injured students down the mountain.

They arrived at Laban Rata at about 1pm and met three other TKPS pupils - Arnaav Chabria, Emyr Uzayr and Izzaty.

"We were supposed to take a helicopter but it couldn't land," said Ashley.

When the helicopter was still unable to land at about 4pm, the group had no choice but to walk down the mountain as it was getting late.

Wafeeq was carried down by a mountain guide, Mr Rizuan Kauhinin, 25, and later placed on a stretcher as they approached Timpohon Gate at the base of the mountain, said Madam Farhan. A photograph of them later went viral, and Mr Rizuan was hailed as a hero.

Madam Farhan said that the five children were the last from TKPS to reach Timpohon Gate.

"Mr Faizal ensured that they were all safe and sound at Timpohon Gate before he sought medical treatment (himself)," she said.

Ashley, who is head of discipline in her school's student leaders' council, said: "We reached Timpohon Gate at about 7pm. We were the last five to get down there."

This article was first published on June 13, 2015.
Get The New Paper for more stories.