Trapped in debt to save face 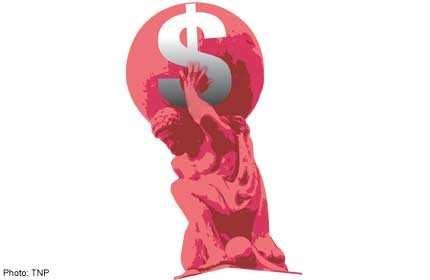 It was a painfully expensive lesson for someone who once earned $200,000 in just six months.

The real estate agent, who agreed to tell her story on the condition that we only use her surname, was just 27 years old when she found herself mired in debts of nearly $100,000.

She blames it on leading a lifestyle that she could not afford and does not want her friends to know about her debt.

Ms Tan, 31, tells The New Paper on Sunday: "Everyone was living the high life and I felt compelled to live like that too."

She took on a job as a real estate agent in 2007 - smack dab in the middle of the property boom.

The money just rolled in.

And with that came the desire to live well.

Then came the splurges on designer clothes and bags that added to complete her good looks.

She also wined and dined exclusively at the most expensive restaurants.

The exorbitant spending didn't matter, she recalls. "I told myself, 'I had the money, so why not?'"

She says she easily spent $10,000 a month on just entertainment.

That also meant she had little savings. And when the property market crashed last year, she had nothing for the rainy days ahead.

Ms Tan says: "Most months, I couldn't sell a single apartment - my income was practically zero."

But making herself adapt to her lower income was difficult.

"I knew I had to cut down on my spending, but I wasn't willing to."

She confesses that her number one priority was to continue portraying the image that she was still well-off.

"I was obsessed with my image. I wanted to show my friends that I was still doing well.

"But I was desperate for money," she says.

In mid-2009, she observed that despite the property slump, some of the other agents, including a good friend, still seemed to be doing well.

Envious, she approached that friend who claimed that he was "dabbling in investment".

Says Ms Tan: "He asked me if I wanted in and of course I did. He promised me at least 20 per cent in returns."

She claims that she invested $30,000 in the scheme, which had no specific name, but it involved "investing money in one company and then taking the returns to invest in another company".

By the time she found out she had been conned, he had run off with her money and that of the others who fell into the same trap.

Ms Tan says she didn't file a police report because she was embarrassed and wanted to forget the whole thing.

Plus she had more pressing worries like the four credit cards she had taken up to accommodate her extravagant lifestyle.

She fell into her next debt trap: She started to place bets on illegal online football websites, thinking that gambling was the only way to recover her money.

And despite it all, she continued to splurge. She says with remorse: "I couldn't stop. I would even treat my friends to expensive hotel buffets because I wanted to show off my 'wealth'."

She didn't have the money, but also "didn't want to lose face in front of my friends".

Unable to pay off her gambling debts, operators of the betting sites started to harass Ms Tan by showing up at her parents' home in Yishun.

This severely affected her relationship with them, which later led to a violent altercation.

Her parents took out a personal protection order against her, their only child.

Ms Tan moved in with a friend for about six months, during which time she spiralled into depression, cutting herself and facing suicidal thoughts.

Trouble continued to plague her.

Before she had a chance to recover from her debts, she fell pregnant.

To add to her woes, her then-boyfriend did not want anything to do with the baby.

But even that did not stop her from partying with the use of her credit cards.

She finally came to her senses in 2011 after her father died.

She regrets that she did not manage to reconcile with him before his death, but she has since moved back to live with her mother.

Their relationship is still a little strained, but it is getting better, she says.

Ms Tan began her road to recovery by approaching Credit Counselling Singapore (CCS) which helped with bank negotiations so that she could pay off her credit card debts of $40,000 in five years without worrying about the inflated interest rates.

Step one, she had to sell her car.

She admits: "It was difficult, but it was something I needed to do. It was only then that I finally turned over a new leaf and stopped spending extravagantly."

She takes the bus or MRT now. Ms Tan, who now earns about $15,000 a month, took two years to pay off her debts, with the final instalment cleared last month.

She says: "I felt so relieved when I paid off the debt. It's a huge burden lifted off my shoulders and now I can take care of my daughter without any worries."

She has stopped her splurging and hardly goes shopping.

Instead, she invests in her two-year-old daughter's enrichment by sending her to classes.

Ms Tan says: "When I was younger, I was just greedy and didn't care about anything else other than my image.

"I really regret that attitude now. I've also learnt not to be so dependent on credit cards and to be wise with my money."