'Treat maids with dignity in ads' 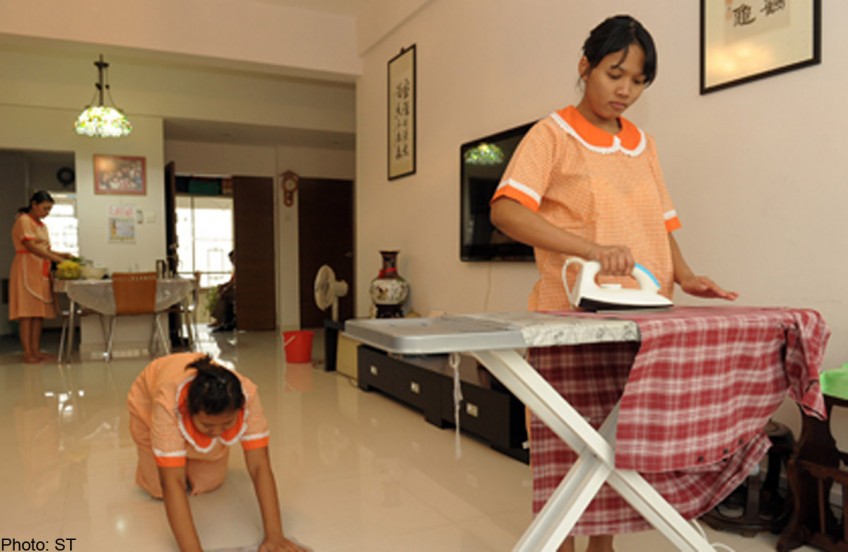 The Ministry of Manpower (MOM) has asked maid agencies to ensure that their advertisements accord maids "basic respect and human dignity" in the wake of a foreign news report about how these workers are marketed like goods here.

In a letter sent out yesterday, MOM's deputy commissioner for employment agencies, Ms Penny Elaine Yapp, said the ministry is concerned by "incidences of insensitive advertising and inappropriate display" of maids.

She noted that advertisements at some agencies emphasise cheap fees, promotional rates and discounts, giving the impression that foreign domestic workers are "being marketed as merchandise". Ms Yapp said advertisements should not include "fees or liken foreign domestic workers to merchandise that can be purchased and replaced when found unsatisfactory".

The letter comes on the back of a news report by Arab news agency Al Jazeera earlier this month, which said maids here were being marketed as "commodities".

The story highlighted the apparent lack of respect for maids when they are "displayed" in agencies surrounded by "garish advertisements offering super promo rates".

Maids were also described as being on "display at work in mock living rooms" as they carry out tasks such as ironing clothes and pushing one another on wheelchairs.

MOM did not mention these training rooms in the letter. But it said getting maids to sit outside the agency premises is unacceptable.

Ms Yapp said MOM will take action against agencies which continue in their disrespectful marketing strategies.

Maid agencies interviewed said they hope MOM's reminder will stop errant practices which have drawn flak from governments of foreign countries where maids hail from.

Following the Al Jazeera report, the Philippine government launched a probe into the marketing strategies of agencies here. It has barred two Singapore maid agencies, Homekeeper and Budget Maid, from recruiting Filipinos. The ban has yet to be lifted.

Homekeeper agency said the report was unfair and has asked Al Jazeera to publish a clarification. However, it has not heard back from the news agency.

Some maid agents suggested that MOM go a step further by including advertising standards in regulations for maid agencies.

Mr Stephen Chia, who owns 21st Century Employment Agency, said: "Only then will agents abide by the rules."

Other agents are less optimistic that industry practices will improve.

They said the MOM letter does not address the problem of maid agencies competing to charge low prices, which is the reason for ads promoting low fees.

Best Home Employment Agency boss Tay Khoon Beng said: "There is a price war going on now, where agents are competing to slash fees. We should move towards competing on quality and service but I don't see this happening."

Separately, MOM said in a press release yesterday that a maid employer has been fined $12,000 for not paying his maid. Razalee Rasdi, 51, had owed the domestic worker salary amounting to $7,450.40.