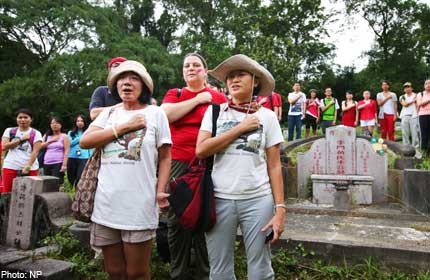 Organisers of the Bukit Brown tour Claire Leow and Catherine Lim (wearing hats) with others saying the pledge.

SINGAPORE - The National Day Parade (NDP) was also celebrated with much fanfare and pride in Singapore's most famous cemetery.

But this well-known acronym stood for something quite different for a group of heritage lovers - the National Deceased Parade.

As Singapore commemorated its 48th birthday on Friday, our NDP, or National Deceased Pioneers, were also remembered.

A group of 80 people from all walks of life visited the graves of at least 48 eminent Singapore pioneers during a tour of the Bukit Brown cemetery.

The tour was organised by a group called All Things Bukit Brown. The volunteers, or the "Brownies" as they call themselves, have been conducting guided walks around the cemetery since January last year.

Some of the tombs, which are slated for exhumation, were highlighted during the tour.

They include the family graves of prominent share broker Khoo Kay Hian, who made his fortune during the rubber boom of 1910, and went on to set up one of the best-known stockbroking firms in Singapore.

The simple and elegant family tomb of Teochew community leader Lim Kim Seng, a former Justice of Peace who died in 1967, was also visited.

Closed as a Chinese burial ground in 1973, Bukit Brown has Singapore's oldest graves, with tombs from as early as 1833.

Flowers were left at every grave as the visitors trudged five hills of the cemetery during the 2½-hour tour.

This year's "NDP" tour was especially poignant for the visitors and heritage lovers.

This will be the second and probably last time they will get to celebrate National Day on the burial grounds of many of Singapore's dead elite.

It was a hauntingly patriotic moment when they recited the Singapore pledge in unison as the fighter jets flew past the cemetery on their way to the Float@Marina Bay for THE NDP.

The visitors also observed a moment of silence for the dead at Bukit Brown, especially for those in the unclaimed graves that would be exhumed. About two-thirds of the 4,153 graves to be exhumed have not been claimed.

Admissions officer Fen Yoh, 32, who was on the tour for the first time, thoroughly enjoyed it but was hit by pangs of sadness during the observation of silence.

"It was quite an overwhelming moment to realise that future generations would not get to see the rich heritage and history of the place," she said.

On Monday, the Land Transport Authority announced that a tender had been awarded for a dual four-lane road to link Adam Road, the MacRitchine Viaduct and Thomson Road via Bukit Brown cemetery.

Exhumation will take place in October.

But the Brownies are keeping their fingers crossed.

"Though we remain hopeful, it is possibly the last NDP commemorated at Bukit Brown as it is now.

"So this is a poignant one, as we are all saddened by a Bukit Brown that will be changed beyond recognition," said organiser Catherine Lim, a freelancer in the media industry.

Project administrator Theresa Teng, who is in her 30s, has been to the cemetery three times in four weeks.

"My friends thought that I was crazy to spend my National Day holiday at the cemetery, but we won't be able to celebrate National Day without our pioneers, who paved the way for Singapore's success."