PETALING JAYA - The US State Department seems to think that Singapore is still part of Malaysia.

In posting the transcript of a press briefing that Secretary of State Mike Pompeo gave on Monday, the venue was described as “JW Marriott, Singapore, Malaysia” on the department’s official website.

As of 1.45pm Tuesday, the mistake had yet to be rectified.

US President Donald Trump is holding a historic summit with North Korean leader Kim Jong-un in Singapore, with their talks expected to centre on ending the North's nuclear weapons and missile programmes in return for diplomatic and economic incentives. 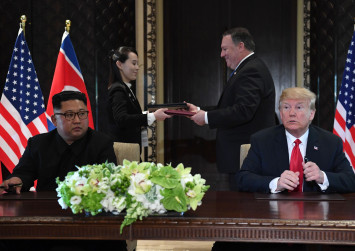 Pompeos’ briefing was a preview of what the discussions, taking place Tuesday, would entail.

Singapore joined with Malaya and the two Borneo states to form the new federation of Malaysia under the terms of the Malaysia Agreement in 1962.

However, it left in 1965 to form the independent Republic of Singapore.

The choice of Singapore as a venue for the meeting between Trump and Kim had been heralded as a proud moment for the island-republic, which may now have a thing or two to say to the US State Department.