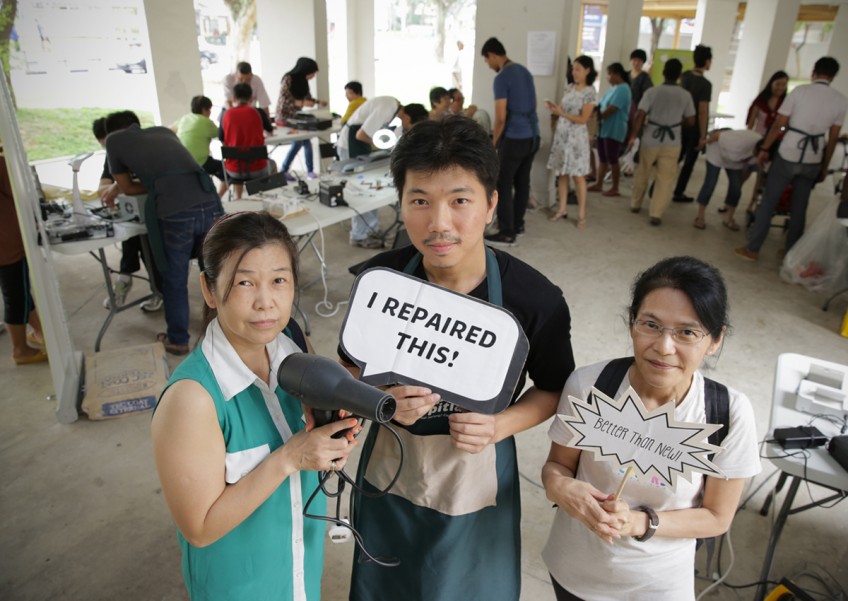 At a Repair Kopitiam meet-up, participants (from left) Tan Tong Chin, Kua Hwee Siong and Alice Tan show a 10-year- old hairdryer that they had repaired successfully.
The Straits Times

The soles of her rubber shoes had come off and Ms Nur Liyana Omar was about to throw them away when she learnt at a community meet-up that they could be repaired with contact glue. The adminis- trative executive at a research institute says: "It was the first time I had heard of such a product."

The half-day meet-up, called Repair Kopitiam, was an initiative started by social enterprise Sustainable Living Lab this February. Five meet-ups have been held so far.

At each gathering on the fourth Sunday of every month at a void deck in Jurong West Avenue 1, volunteers, or repair coaches, teach repair skills for fabric, furniture, toys and electrical appliances.

Ms Liyana, 23, has attended three meet-ups and is training to be a repair coach. "It's very empowering to be able to fix your own things. I don't have to run to my dad every time something gets damaged."

She recently tightened a plastic part in a ceiling fan that was loose. She has also helped her niece and nephew repair their toy trains.

She says: "In the past, they would just put their broken trains aside and ask for new ones. It's good that they are learning from a young age that things can be repaired."

Repair Kopitiam is one of several initiatives that had sprung up in recent years to get people to prolong the lifespan of their belongings by re-using them or, in the case of another project called Save That Pen, refilling them.

Save That Pen was founded by four students from the National University of Singapore (NUS) in 2010. It encourages people to drop their unwanted pens into "pen collection bins" in tertiary institutions including the NUS, Nanyang Technological University and Singapore Management University.

The founders, who have since graduated, and their 15 volunteers refill the pens and donate them to the underprivileged here and in the region. They do this on Saturday mornings every three months.

Ms Goh Huishan, 28, who is now a teacher, says they came up with the idea as they saw that most people here use disposable pens only once. "We wanted to encourage people to use refills," she adds.

Project Upcycle by Central Singapore Community Development Council (CDC) conducts workshops on repurposing old items. During each session, which lasts between two and four hours, participants learn to turn old clothes into bags and purses, and make book clutches out of old hardcover books and cloth.

Started in March this year, the project has run 15 workshops, each drawing about 10 participants.

Projects include making signage out of planters and driftwood, and mobile-phone holders. D-I-Y fans can buy a daily or monthly pass to use the space and equipment at XPC to work on their own projects.

Mr Eugene Tay, 37, executive director of Zero Waste SG, says the growth of the D-I-Y scene has contributed to the focus on reuse here.

He says that in the past, the emphasis was on recycling but now, there is more focus on reducing waste and reusing items. He adds that reduce and reuse are "greener" options than recycling. He adds: "Recycling uses more resources as it involves breaking something down into its raw materials and processing it into a new product."

He says the trend is here to stay: "Resources are not unlimited and as landfills fill up, people have no choice but to reduce and reuse."

The landfill space at Pulau Semakau is expected to run out by 2035.

Statistics by the National Environment Agency show that the total waste generated has increased by 61 per cent from 4.7 million tonnes in 2000 to 7.5 million tonnes last year. Sixty per cent of this is recycled, mostly from industrial and commercial waste. Only 19 per cent of household waste is recycled.

Apart from green groups, there are also individuals doing their bit for the environment.

Ms Agatha Lee, 42, a former senior policy executive at National Environment Agency, is a repair coach at Repair Kopitiam. She has been running monthly clothes repair workshops on her own called Fix It Friday for the public since last November. She also posts clothes repair tutorials on her environmental website, Green Issues by Agy.

This year, she went beyond repairing to upcycling. At her ad-hoc Restyle Your Wardrobe workshops, participants learn to turn a pair of too-tight jeans into a skirt or combine a top and bottom to make a dress.

Each workshop draws about eight people. Fix It Friday, which lasts about two hours, costs about $8 a participant while Restyle Your Wardrobe, which runs for half a day, costs $85 a person.

Ms Lee, who left her job three years ago to pursue her passion full-time, started upcycling her clothes in 2008 because she did not want to throw them away. She upcycles or repairs 90 per cent of her clothes as well as her husband's and 10-year-old son's .

She co-founded the non-profit Connected Threads Asia to raise awareness about this issue through documentaries and panel discussions, among other things.

Response to the initiatives has been encouraging. Repair Kopitiam started with about 100 participants at each session and now draws double that number. Ms Farah Hidayati Sanwari, 26, who leads the initiative, says: "One participant came back and shared with us hashbrowns she had cooked with the air-fryer that was repaired.

Repair Kopitiam plans to invite schools and companies to start their own such initiatives.

The Save That Pen project, which is supported by Young NTUC, the youth wing of NTUC, has collected about 70,000 pens so far. It has refilled 18 per cent of them and given 20 per cent away under its Adopt-A-Pen programme.

It also has a starter kit for schools and companies to start their own programme.

More than 20 primary and secondary schools have done so.

The project founders are now looking for recycling partners to recycle the rest of the pens that cannot be reused or refilled.

Members of the public who have taken part in these green initiatives are full of praise for them.

His son loves tinkering with things at home.

But Mr Nah got hooked and the father and son have gone on to become repair coaches there.

The skills have proven to be useful.

He says he is now more confident about repairing electrical appliances at home while his son fixes his own headphones and toy guns and mends torn pillow cases.

Nr Nah says: "More importantly, we are now more mindful about throwing things away. We will always try to fix them first."

For architectural designer Felicia Ow, 31, a DIY Your Clothes workshop in March this year opened her eyes to what she could do with clothes she could no longer wear.

She picked up basic sewing skills and upcycled a sleeveless top that she had outgrown, by adding sleeves and fabric on both sides to loosen the outfit.

She says: "My family and friends loved it." She has since upcycled other clothes for herself and her family members to wear.

Mr Tony Goh, 53, also does not believe in wastage. He remembers the old days when his mother added flour, stale bread, egg and vegetables to leftover porridge to turn it into a vegetable pancake.

The father of three says: "We didn't have the means to buy more than necessary. My brothers and I were always thinking about what we could create from the things around us."

He left his job as a special scaffold designer last year to work as a maker-in-residence at XPC.

He uses unwanted pallet wood and glass bottles collected from pubs and the beach to make things that are "aesthetic and practical".

He has made table lamps out of glass bottles and a Bluetooth radio from a broken mobile phone and old radio.

He says: "It gives me a great sense of satisfaction when I create something useful out of what others had found little use for. It's my small way of contributing to the environment."