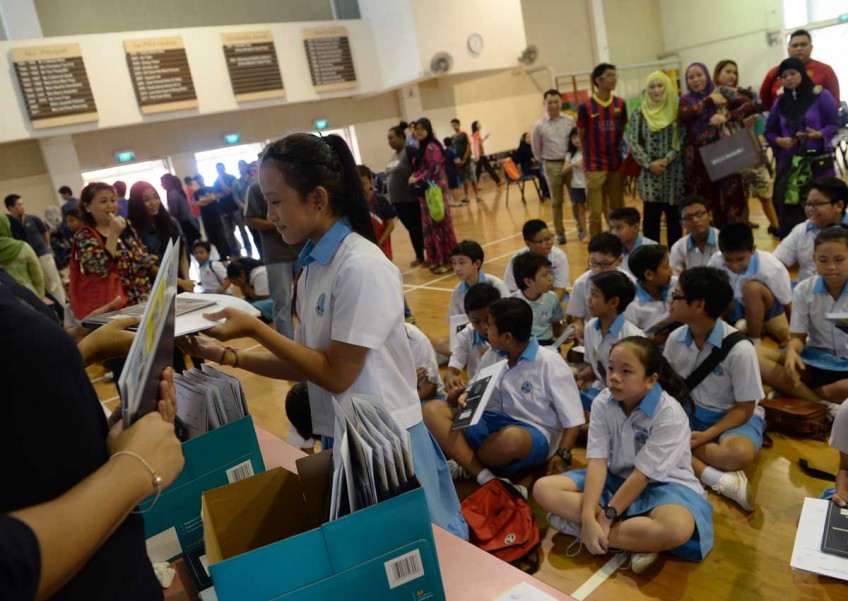 It has been a long wait, but the Ministry of Education (MOE) finally revealed the details of the new Primary School Leaving Examination (PSLE) scoring system yesterday.

Many parents with pre-schoolers were relieved about the phasing out of the PSLE T-score, where each pupil is compared with his peers.

Under the new system from 2021, the score given to each pupil will be based on how well he has done in the subject, independent of how others fare.

Many parents agreed that the T-score, which ranks a pupil's performance in relation to his peers, ratchets up the competition.

They hope the new system will create some space for pupils to pursue other activities that arm them with the skills needed to thrive in a volatile, uncertain future.

But will the new system effect change?

Will parents stop pushing their children to chase that last mark and, instead of sending them for tuition, encourage them to pursue sports or the arts, nurturing in them creativity and people skills that are becoming essential for work?

Unfortunately, this does not seem likely - at least in the initial years.

Several parents with children in Primary 1 and kindergarten already admit that their target now will be a PSLE score of 4.

This means the child will have to score at least 90 marks - in all four subjects.

Those hoping to enrol their children in Raffles Institution or Hwa Chong feel that the new system affects their chances.

Since a wider pool of pupils will be able to meet the entry score, they may be reduced to keeping their fingers crossed at computerised balloting.

Said one parent who did not want to be named: "So, for me and my son, the stress and competition will not be reduced. And to think that now we have to take our chance at a lottery - that just increases my anxiety."

A few parents voiced concerns over the fact that, under the new system, it will not be possible for a pupil to "make up" for a weak subject by doing very well in the other three subjects.

Under the current T-score system, a pupil can still get a good T-score with three very high A stars and one B.

On the flip side were several parents who felt MOE has not been bold enough with the changes.

They think the Grade 1 band is pitched at too high a level at 90 marks.

A typical comment came from mother-of-two Desiree Teo. "Surely, if you want to reduce the stress and want pupils to pay attention to developing other skills, an 80 or 85 will do. Why set the bar so high at 90?" she asked.

When two pupils are tied for a place in a school, the one who listed the school as his first choice will have priority over the other who listed it as his second choice.

Parents are worried that it will be difficult to choose, given that schools do not publicise their distinctive strengths well.

But it is important to keep in mind that the changes in the PSLE scoring system are just one part.

Another big piece of the change, which is still a work in progress, is helping every secondary school to build distinctive strengths.

With several good schools to choose from, in the years to come, pupils will hopefully pick the best school to nurture their interests and talents, and not just the top-performing school in the O or A levels.

MOE should show parents how it is committed to making every school a good school.

It should be transparent about its spending on the lesser-known neighbourhood schools and ensure they are given the resources, including talented principals and teachers, to build distinctive programmes.

This will go some way towards correcting the perception that it spends more on "elite" schools and allocates better teachers to them.

The move to send some well-regarded principals to neighbourhood schools is a good one.

This should be publicised more.

But fixing the education system is a long-haul process.

Hopefully, with time, parents will come to realise that they need to have a broader view of education.

As then Education Minister Heng Swee Keat warned last year, to continue on a path with a narrow focus on grades and examinations could lead the country into "a spiralling paper chase and expanding tuition industry".

It would churn out students who excel in exams, but are ill-equipped to take on jobs of the future.

Neither will they find fulfilment in what they do.

The alternative requires parents to give up their obsession with grades, recognise their children's strengths and build on them.

Teachers and employers have to make a shift too.

Teachers should strive for all-round development of their students, and employers - including the Government - have to hire or promote based on skills and not paper qualifications.

Hopefully, Singaporean parents, being a practical lot, will see the wisdom in taking the second path.